Today’s signing of Jeff Petry to a wayward contract implies the club plans to start the season with Oscar Klefbom in Oklahoma City, and perhaps Justin Schultz on the third pairing.

That’s my guess, you may have a better one. This also allows Darnell Nurse to have his 9-game look if it comes to that (they can IR someone, it’s done all the time) and in reality Klefbom probably plays 20 games or more in the first half of the season anyway because of injuries. Petry’s value took a wallop today in terms of Oiler return, in a deep draft like 2015 we might be looking at a third-round selection at this year’s deadline.

This is a ghastly way to lose your best defenseman, I hope Justin Schultz is worth it. It would have been very nice for Darnell Nurse and Oscar Klefbom to get some minutes in the NHL (like Martin Marincin) alongside Petry, but as of today I don’t think we can get there from here. 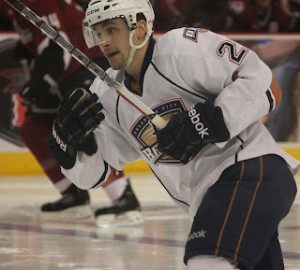 Every NHL team needs to rely on their minor league and procurement system for help, and in the case of the Edmonton Oilers the center position is in the spotlight. Mark Arcobello and Anton Lander from Oklahoma City, Bogdan Yakimov from Russia and Leon Draisaitl from the WHL are prominent names who could be a part of the team this winter.

I’m less worried about center because of Arcobello’s strong showing a year ago. It would be very dangerous for the Oilers to deal Petry for a center at this point, it’ll still be crazy to do it in February. That said, it’s good Arco is here, and maybe Lander too. Those two can’t post offense, but the idea of three scoring lines always seemed like a distant bell, and that is once again the case.

Craig MacTavish got quite a bit done on the blue line this summer, and did in fact retain Petry for the heart of the 2014-15 season. It appears as though he could not retain that blue AND deliver a strong option at center. I’m satisfied with this compromise, more satisfied than a deal that sent away defense for center.

This has been a bad day. No way around it.