There are few things in sports I enjoy more than a draft and follow. I discovered the practice during my years as a baseball fan. A team would take some kid who barely played and say “well, he’s a kid we like the look of, if he can get a foot on that fastball of his maybe we have something” and it stuck with me as a chance to cheat the system. Long odds, mind, but better to take a player whose photo hasn’t quite developed than one who is fully developed and unimpressive. And at the end of the draft, that can happen.

Six summers ago, I wrote about draft and follow and said the following:

The Oilers had just drafted a kid (Bendfeld) they could have SIGNED a few weeks later. That’s just silly, especially if there was no lineup for his services (and please please don’t argue that Jordan Bendfeld had a lineup for his services). It might have been a favor for a friend, or maybe one of those moments where they were tipping the cap to a scout for passing over several years worth of talent in his area (don’t laugh, this happens in baseball and hockey).

Travis Toomey did not turn into an NHL player, but I cheered for him all down the line. Draft and follow. These are my people.

This brings me to Keven Bouchard. He’s a draft and follow. On draft day, I was critical of the pick (why you use two out of six picks on goalies in any draft is beyond me. It’s like drafting one pitcher and six catchers) for reasons beyond the player (well, his save percentage was no screaming hell, either). Upon reflection, something an instant analysis on draft day doesn’t allow, Bouchard is exactly the kind of pick I like: draft and follow.

We’ll see how this turns out, but Bouchard has a decent resume, and could blossom in his final two season in junior. There’s some knowledge of the player, and his save percentage from January through the end of the regular season was .929.

Math and the Draft, Volume 33

SIZE MATTERS MORE THAN EVER 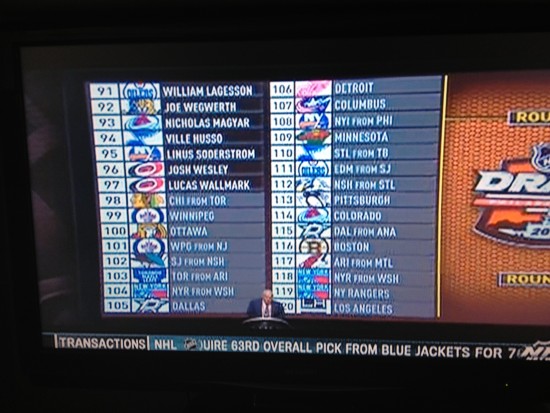