By the sixth round, we’re looking at about a 14% chance of seeing an NHL player. You’d have to pile more than 7 picks one on top of another to ensure one player arrives on your doorstep, so there’s a slightly better chance of finding a player here than the fifth round (historically). This speaks to the luck involved for any pick outside the top 100 in each draft year.

In the comments  section of the round five post, several worthy posts pointed out the ‘dice have no memory’ and that you can’t pile players on top of each other and assign blame once your chances reach 100%. Totally agree. Now, let’s have a look at the sixth round.

Six players have been taken in the sixth round during the MacGregor era, and at 12% we’re looking at most of one NHLer of 150 games (with the understanding that we aren’t really, because the dice have no memory, etc). 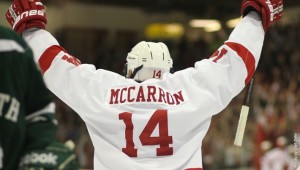 Hartikainen doesn’t count as a ‘successful’ pick, but any fool can tell you 50 games from a sixth round pick is a nice return. Harski has not (as yet) played 150 games, but he may get another opportunity Toronto or another NHL team. I don’t think there’s any evidence Hartikainen can’t play in the NHL.

The sixth round picks under MacGregor have done pretty well as prospects. Czerwonka never did turn pro because of an injury, but the other men are alive and well as future NHL options. Now, a little reality about all of this: it’s not terribly likely any of the names on this list play more than Hartikainen already has, and it’s possible Hartikainen never plays in the NHL again. That said, there are four guys plus the new pick who are matriculating.

16 Responses to "THE SIXTH ROUND"