I WISH TODAY COULD BE TOMORROW

Edmonton enjoyed a glorious summer day on Saturday, and for a few hours we cheered on the Eskimos (well for an hour or so, anyway) and put away thoughts of the coming frost (chilly September nights in EDM are one of my favorite things about the city). It’s a short-term thing, you can see winter coming all around you. Kids are back in school, the leaves are turning, Oiler kids headed to Penticton are tweeting out that little airplane icon with YEG next to it, and of course the forecast tomorrow is rain and 4 degrees (which may mean that four letter word that rhymes with blow). 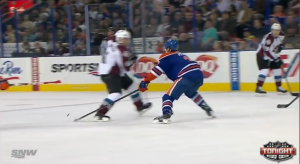 Jonathan Willis wrote a quality piece over at the Cult of Hockey about Jeff Petry, with former coach Steve Smith singing his praises. We know Dallas Eakins loved him, Smith loved him, and yet we have a one-year deal. This leads us to question where the disconnect happened, and there are only three options:

I’ve come to the conclusion Craig MacTavish spent Jeff Petry’s money on Mark Fayne. I’m wildly disappointed the team will proceed with Fayne and Justin Schultz as the 1-2 RH D for the next several years, and there’s lots of evidence Petry would be a superior choice for one of those two roles. The Oilers saw fit to give Petry his freedom July 1, and one suspects he will not give it up for less than a monster contract.

Of all the things the Oilers talked themselves into this summer, I count this one as the most unforgivable. The 2C conundrum is a difficult problem. The Jeff Petry contract is a potentially devastating miscalculation.

The Oilers are in good shape in regard to the 50-man list as they enter training camp, they could pluck a contract via trade or waivers pretty easily. If you have a minute this Sunday morning, check out the number of minor league RFA and UFA on that list next summer. MacT has put himself in a position to turn over (or retain) a large group of players next year. It’s taken this long to purge the group and I expect he’ll finish the job in 2015 summer. Curtis Hamilton photo by Rob Ferguson all rights reserved.

Some leagues and Oil prospects are playing already. Here’s a quick review of the stats so far:

Oilers still haven’t released the roster yet, which absolutely convinces me there are players still making their decisions. This should be a very interesting list. Will we see David Musil and Laurent Brossoit, as had been reported early this summer? Fun days ahead. Make sure you have your windshield scraper in all the cars, especially the one your wife drives. As you age together, there are fewer things she needs you for. 🙂

81 Responses to "I WISH TODAY COULD BE TOMORROW"