Although they won’t make this year’s Oilers there are about one half dozen prospects who are tracking as future NHL players. This group won’t be in training camp much longer, so this is a good time to identify them, project them for the coming season, and predict their chances of becoming big league skaters.

It’s important to keep these things in context, but Nelson doesn’t throw around compliments easily and his words on Khaira are encouraging. The young man played in a button down system under Kevin Constantine, but his NHLE’s since draft day reveal a checker’s future: 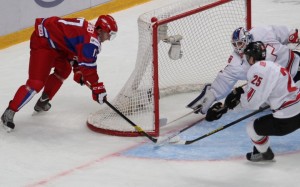 Anton Slepyshev picked up an assist in today’s KHL game (it’s after one) and despite not getting huge playing time this season there are some interesting results. The KHL gives TOI (not broken down by discipline) and the young man is off to a better start this season.

He’s still not getting enough playing time, but the early results may get him more as injuries hit Salavat Yulaev. In light of Yakimov’s strong showing, perhaps this Slepyshev fellow will be a pleasant surprise when he arrives in Edmonton next August.

Brendan Ross is a bright guy with some interesting takes on the draft, his 2015 list is up and worth reading. The top of the draft is drunk with centers, and low on WHL types. The Euro’s won’t emerge heavily until spring and it looks like there are THREE franchise players for 2015.

I can try to convince you that there are all kinds of battles this TC for spots, but really we’re talking 4R, 13F, 14F and 7C. Fringe players with one starting spot open. My handy-dandy notebook suggests there are 11 players vying for the spot, but that’s really stretching it.

Everyone is waiver eligible save Pakarinen, Nurse and Klefbom. The big item for any of these waiver forwards? Management’s decision on their future being part of Edmonton’s overall 2015-2020 roster. If they see Pitlick and or Lander as a possible piece, they make the team unless the gap is massive (and I don’t think it is). A player like Pakarinen would have to kick out the jams compared to Pitlick in order to win the day. If Tyler Pitlick is a legit prospect, and I think he is, that hurdle should be cleared easily during the pre-season.

Lander’s job is slightly more complicated—Acton’s resume has some useful tools—and that may be enough to waiver Lander. I don’t think it will be, not this fall. Lander and Pitlick should be on the opening night roster (save injury) because the club isn’t sure—that’s completely different than the Deslauriers years where they just kept holding on.

Fun show today, 10 this morning on TSN 1260. Jonathan Willis pops in at 10:05 to give his take on the Oilers TC and those final spots. He’s followed by Jeff Hauser from Radio Hauser and NFL chat. At 11, Scott Cullen has his NHL point projections out and we’ll suss through them. At 11:25, Guy Flaming talks about the new Oil Kings and the team’s chances, and Dave Jamieson pops in at 11:45 to talk football.

One final note: I’m not your Dad, but would request we all get along a little better. As more of us pop in during TC, old arguments are renewed and that’s cool. However, it can get personal and we lost a valued poster yesterday for no good reason beyond my neglect. I don’t catch everything, so please be good to each other. Thanks.

92 Responses to "THE OUTSIDERS"