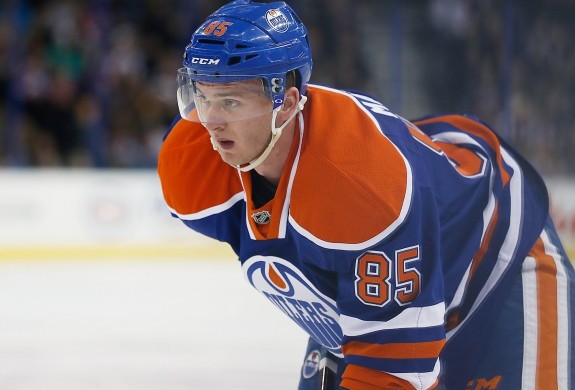 That was a solid effort last night and the Edmonton Oilers are now 4-4-1 with Nashville in town tomorrow. This Oilers team appears to have an extra gear—a bend-not-break gear—they simply didn’t have one year ago. The additions of veterans Mark Fayne, Benoit Pouliot, Niki Nikitin and goalies Ben Scrivens and Viktor Fasth have helped, and second-year man Martin Marincin’s contributions are also a big part of the team’s success.

One of the stories we really need to pay attention to this season is young Marincin. He’s miles from being ready for this, but the fact he’s not -10 already is a pretty good sign for his future.

Fascinating look at what happened with the game in the balance. Marincin and Fayne, despite getting the tough zone start and some of the toughest assignments, shone brightly in the Corsi box last night. I also thought Ference had a good game last night and Jeff Petry remains a quality defender. Even Justin Schultz had moments of effective defensive play.

I think last night showed the Oilers’ blue isn’t strong enough to control play in the defensive end, but does (or is gaining) enough of the ‘calm feet’ aspect to their game that we can safely assume most sorties into Edmonton’s end won’t end in disaster.

Martin Marincin has graduated (game 50 Wednesday) to the NHL as a bona fide player. He is one of Stu MacGregor’s picks outside the first round, and took four years and nine games to get here. Waiting five years. It’s the right thing to do.

Darren Dreger on TSN 1050 last night (re Yakupov):  “They were ready to cut bait, there’s no question about that, just because he just didn’t seem to want to embrace some of the things you have to embrace to be an all-around good player in the National Hockey League and because of that his ice time had to be taken back.  You know, every time I check, and it’s frequent on Yakupov because again, we were one of the media groups that was pretty vocal in pulling this kid apart last year, so you want to be fair in that process. And every time I’ve checked, and this was as recent as late last week, the message from both Craig MacTavish and Dallas Eakins has been consistent – he’s making really strong progress.

They like the way he’s trying to add that defensive structure to his game. He’s not there yet. He’s not there yet. And it’s easy to be critical of Nail Yakupov, but I know from Eakins’ perspective, he spent a lot of time with him on the phone over the offseason staying in touch, making sure he was doing things that he needed to do.

So Eakins and the general manager still have a lot of time for Nail Yakupov, regardless of what’s being reported in Edmonton.”

The Russian’s goal last night and his quality play overall were a nice cap on a day when Oilers Nation showed in real form just how devoted they are to Yakupov. An article by Mark Spector earlier in the day caused a large backlash which Spector acknowledged during the game broadcast last evening. Lost in ALL of the verbal is that Nail is struggling in some important areas this season. He had a CorsiClose of less than 40% last night and now stands No. 375 out of 417 NHL forwards this season in CorsiOn 5×5.

The visual is far more appealing when he plays like last night, getting four shots and a goal. Bruce McCurdy’s game summary reflected his performance very well. 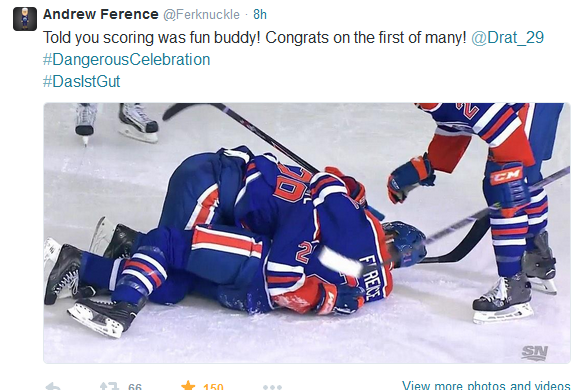 You’re going to read and hear a lot of people with “I predicted this on June 30” but the fact is anyone who has followed this team knew Leon would be here the moment Edmonton didn’t pluck a top free-agent center option after July 1. The trade of Sam Gagner on the Sunday after the draft was also a tell, and really the only true competition for the spot came from Russian Bogdan Yakimov in training camp.

There are some nice things here, but I don’t think it’s reasonable to argue a veteran would do less in this role. The Oilers have a very valuable 19-year old, and I’ve always believed if the player is ready, you play him. Despite some nice numbers, I think it’s too close to call and the team should err on the side of caution. That said, I’m happy for the player and hope he scores 40 points this season. 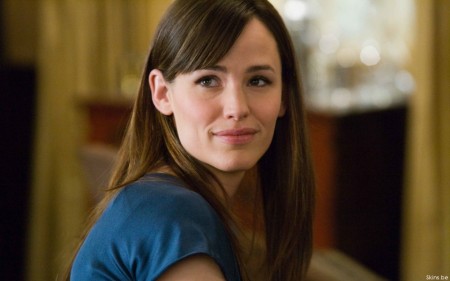 At 10, TSN 1260. We’ll begin the day with Jonathan Willis from Oilers Nation, Cult of Hockey and Sportsnet—he’ll break down last night’s game and give us his take on Draisaitl. Guy Flaming updates the Oil Kings, the 2015 draft and Greg Chase’s chances of making the WJ team at 10:25. At 11, Alan Hull from Copper & Blue drops in and we’ll talk about Ben Scrivens, the current winning streak, and beating western conference teams. After that, open line and I’d love to get your input.

I’LL SEE YOU ON THE DARK SIDE OF THE MOON

REVIEWING THE 2010 OILERS DRAFT
THE HORSES

152 Responses to "WALKING ON SUNSHINE, WOW-OH!"