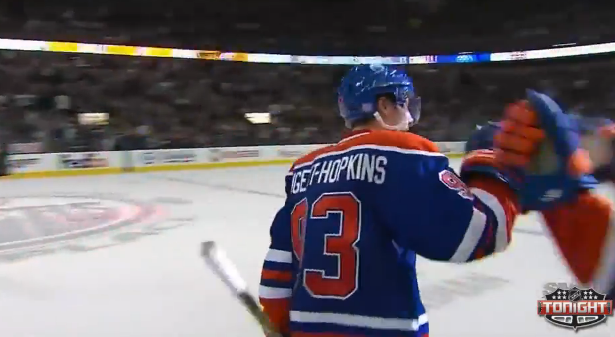 Ryan Nugent-Hopkins is going to be relied on for a complete game tonight in Philadelphia. If the Corgi’s are barking at the Nuge and his line can’t post a crooked number, I don’t like the Oilers chances in this one.

I would have thought Perron was the better fit on the 1line and that Yakupov would have been with Draisaitl and Pouliot, but the lines can change in a heartbeat and obsessing over things like lines is counterproductive. I wish they had a veteran center. It’s also true that much of the narrative after tonight’s game will probably involve things like “what the hell did Yakupov do with his big chance with Hall out” but he begins the evening with a 19-year old center and Matt Hendricks. I bet that changes at some point in the game, probably down 2-0. 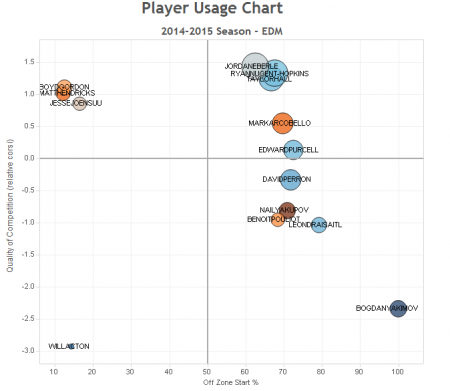 FORWARDS BOXCARS AND FANCY STATS, WITH HALL IN THE LINEUP G’S 1-11

Arco and Yak simply have to do more with those zone starts, and while I’m at it Teddy Purcell hasn’t pissed a drop offensively at even strength this year. We’ll hold these numbers and compare them to what the boxcars and fancies say when Hall gets back. It’s probably a good idea to brace yourself for a dive in production, and I would be shocked if there are still four forwards over 1.80/60 5×5 points when No. 4 returns to the scene.

I don’t know how Dallas Eakins plans to handle the Giroux—Voracek—Raffl line head-to-head, but I think the Oilers have to score four in order to win this game. The performance of the 4line in the Vollman is incredible. I don’t think they can sustain the Corgi’s all year lifting boulders every night, but they’ve done it through 11 games.

The neat thing about this lineup is you can reasonably trust two pairings in a game. If the Raffl line (it’s a great name for a line) is out against Marincin-Petry or Klefbom-Fayne it’s not a disaster, and on the road coach Eakins will probably rely heavily on those two for defensive zone starts. I should also mention Keith Aulie, the club could choose to put him into the lineup tonight. 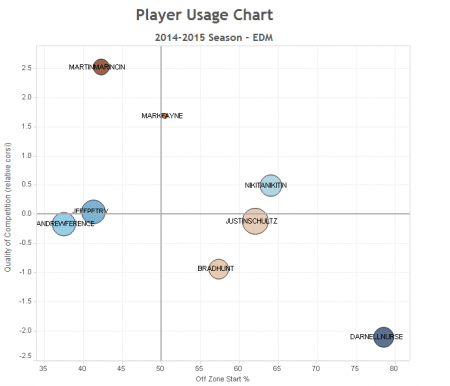 DEFENSE BOXCARS AND FANCY STATS, WITH HALL IN THE LINEUP G’S 1-11

Marincin has basically the same Corsi for as Yakupov, but the zone starts are a killer and his CF% is heading north. I expect Petry’s offense to improve with Marincin and fewer defensive ZS’s, he can help in this area. Finally, notice the ice time gap is closing? Good to see, hopefully the Oilers get an early lead tonight and can give more minutes among the strongest defensive pairings.

It is testimony to the quality of the young people that Marincin is facing (easily) the toughest competition, and young Klefbom is likely to join him starting tonight. The future is above the event horizon tonight men, unless they do something silly like play Aulie. 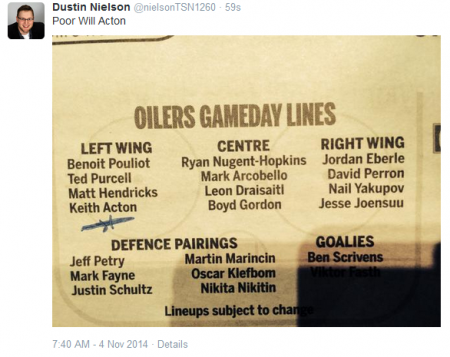 Years ago, Bill James told a story about Tommie Aaron (Hank’s younger brother). Now Hank was an all-timer, the man was a majestic home run hitter. His brother was a career minor leaguer who would spend some time each season in the majors (437 career games in seven seasons). Anyway, this one day Tommie arrives long before game time for BP, and a small crowd shuffles in pre-game to watch. Aaron sends line drive after line drive (he wasn’t gifted with Aaron’s power) into the outfield, trying to improve what God gave him. Finally, after a long while, a woman shouts from the stands “hit it, Hank!” and Tommie Aaron continues the futile slog that is playing baseball in his brother’s shadow. He died at 45, leukemia. 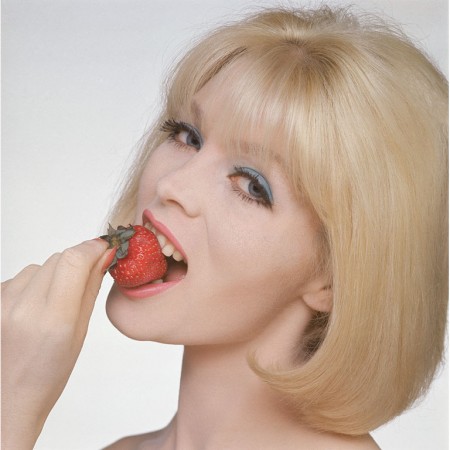