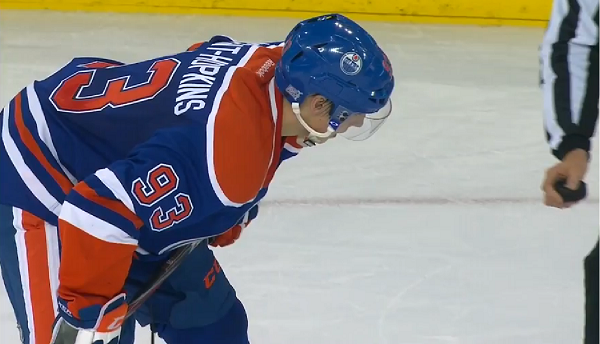 The Edmonton Oilers are past the midway point of the CFR road trip and sit 1-2. With a little luck they might have an extra point or two from the trip, but as they hit Manhattan today there is good and bad in their season. Good includes a stronger (5-8-1 as opposed of 3-9-2) record than a year ago, a definite step forward from RNH, and better complementary scoring from the group of forwards behind the 1line. Bad includes chaos on the blue from veterans and youngsters alike, and that’s something that needs to tighten in a quick hurry.

The Corsi For % 5×5 has improved since Hall’s injury for most of these men, but the 5×5/60 is down pretty much across the board (my nickname for Hall, Chance, is based on his ability to create offense). Players who have tepped forward since Hall’s injury? Mark Arcobello, Edward Purcell, Nail Yakupov. Small sample size, but encouraging to see those three join the party a little more on the road trip.

If you’re looking for areas of strength for Dallas Eakins, check out those zone starts. That’s ideal. 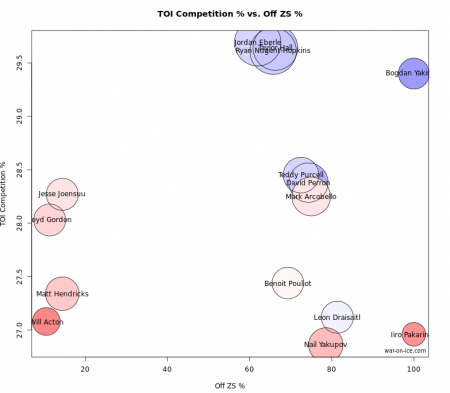 This is hilarious compared to some of the Vollman’s seen over the last few seasons. It’s really hard to argue usage by Eakins on any of these guys, he’s managed to get four players (including a veteran winger) into the easiest quadrant AND give them 70% ZS. Lots of Corsi blue there too, good days. We’re too soon to measure results really, but we can measure deployment right now and this is strong, strong strong.

The Buffalo game (like the Calgary game) impacts everything but these are good numbers. Corsi’s are pretty maids all in a row, these gents aren’t going to deliver a lot of offense but credit Eakins with settling down the TOI to manageable minutes for Justin Schultz. Mark Fayne seems to be settling in, with a few notable exceptions, but Niki Nikitin is a train wreck.

Oilers are going with Nikitin-Petry, Ference-Schultz and Aulie-Fayne today, which seems reasonable. It means Marincin and Klefbom sit, but I don’t think that’s such a bad thing. With even the veterans off the rails, it makes sense for the coach to go with experience until things are settled and then bring in a younger player. Frankly, Aulie has looked pretty good to my eye, Nikitin is the one who should be sitting among the veterans.

One thing I believe to be true: IF the Oilers are looking for an upgrade on blue (as has been rumored) then I suspect one of the kids would be part of the deal. The team has so many defensemen emerging that playing them on one team is impossible. The question is: When do you cash one in? 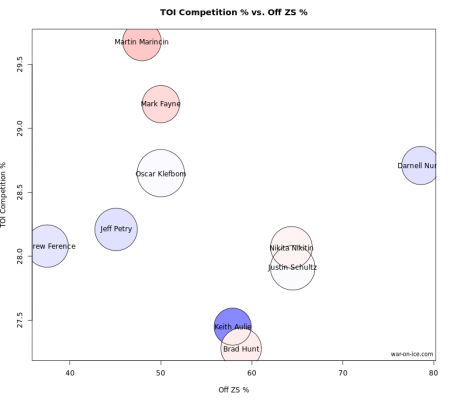 This graph shows that the handling of Martin Marincin is quite different than you’d imagine for a young blue, but he got the same treatment a year ago and performed better in the role. The Oilers (imo) are still finding their way here, with Petry getting tough zone starts, Fayne tougher competition but for me both of those men should be in the upper left quadrant. They are the best shutdown options on the team, hell I’d pair them together.

If I was another NHL team, say the Islanders, I’d ask after Marincin. He might come at an acceptable price and flourish in a difficult role. 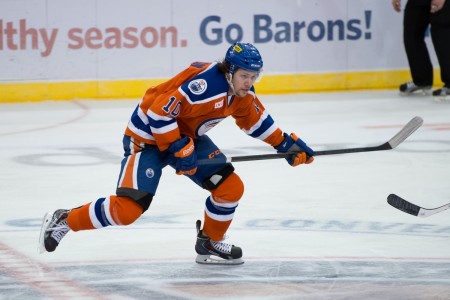 Todd Nelson has those OKC Barons driving like a fast car these days. The club pulled out another win last night, with Curtis Hamilton scoring in overtime. He scored 1-1-2 in the game and is off to a nice start to the season. I wanted to touch base on Mitch Moroz and his season so far, and discuss it within the context of MacT’s verbal about first-year AHL players getting lots of playing time.

It’s tough to do, and even more difficult to put them in feature roles. Here’s the scoring chart for Barons’ LW’s so far this year:

The TOI estimates are from Eric Rodgers at Tend the Farm (here) and are a pain in the ass to do, so please click through and read. That’s from eight games in, so things will change (Curtis Hamilton likely played way more than 10 minutes last night) but I wanted to show it to you because it speaks to coaching and playing time. Mitch Moroz, by Eric’s estimate, is getting damn near 16 minutes a night in OKC when he plays. I believe Eric’s estimated time on ice comes from scoring events, as in an even-strength goal is scored every 4.2 minutes so if you were on for three in a game Eric would estimate 13 minutes of icetime that game.

Through the years these kinds of estimates have been shown to be accurate (when compared to a league that does track the time) so I think we can safely use this as a proxy for the rest of the season (I’ll be talking to Eric tomorrow on the Lowdown about it).

Back to Moroz. Nelson has spoken on this issue many times, about the adjustment period between junior and the AHL, and we know from our own experience watching and reading about these men it’s a helluva jump. Every year, the new hires arrive, the college kids surge, and the junior players’ struggle. Giving them more icetime is a fine idea, but at what point are you showing up the kid by sending him out there to fail (by not impacting the game at all offensively)?

Curtis Hamilton and Tyler Pitlick had a very similar experience in the fall of 2011. Todd Nelson eased them in, and for some that’s one of the reasons they struggled in their careers. I would argue injuries are the main culprit and this is why we wait five years before making a judgement on a player. Curtis Hamilton is in his fifth year after the draft, and should be getting a lot of playing time—if he earns it.

Just like Mitchell Moroz. It has always been thus. My complete RE for Oklahoma City is here.

WHO IN THE WORLD IS AHTI OKSANEN?