Kyle Platzer is gaining traction as a prospect, with a range of skills and a major spike in the boxcars as a kicker. For Oilers’ fans, it could mean a two-way center is on the way via the suddenly flourishing 2013 entry draft. He was part of the dizzying return in the trade of the No. 37 overall pick two years ago. 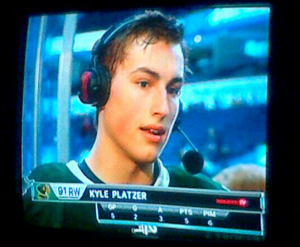 This has been a soft area over the last decade, the Oilers drafted Dubnyk in the first round in 2004 and he was No. 9 overall a couple of times during his progression. The list does highlight the ‘so close and yet so far’ nature of the MBS era, as Hartikainen, Lander and Pitlick have shown enough promise to receive NHL auditions. They have not delivered—at least not yet—and that is the story of the last five seasons at number nine.

Platzer was a depth player in his draft year, the Oilers reached to take him no matter the skill set (he didn’t play a lot, as described by Brock Otten above). In his draft +1 season it was more of the same until a trade to Owen Sound, where (as you can see) he got significant power play time. This season Platzer blossomed and is currently doubling last season’s EV offense and almost tripling the PP totals. That my friends is a nice curve. 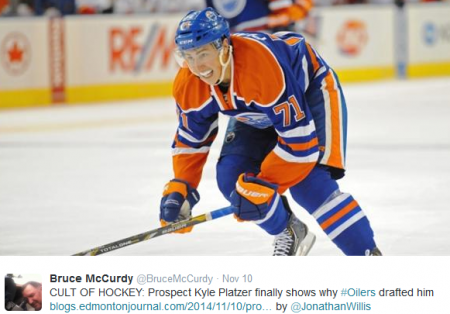 The ranking reflects the enormous bump in offense and is also a tell about what is valued on this list. A complete player’s skills—offensive ability with an extra element like checking or power-play ability—represent a potential prospect treasure. Platzer’s development could be a big damn deal.

When a 19-year old junior player steps up offensively, the reaction is (and should be) ‘so what?’ but in the case of Kyle Platzer the are two items that are important. He didn’t play a regular shift on a big line in his draft year and was traded in year two. Added to the increase in size (the second item) and we may well be looking at a completely different player. Let’s not get ahead of ourselves, he’s a 19-year old prospect whose NHLE (82, 9-21-30) doesn’t scream top 6F. On the other  hand, a two-way center with some skill is always in vogue so Platzer’s progress is a real positive for the organization.

Platzer will probably sign with the Oilers in the spring and try his hand in the AHL fall 2015. If he ends up being a modern Kyle Brodziak? That’s my guess as an outer marker. It’s important for the Oilers to cash some of the group 2011-2013, as the 2010 draft looks like it may be only two deep (Hall, Marincin). One of these draft years needs to provide two or more value contracts. Kyle Platzer is an excellent candidate.

The 2013 draft is tracking very well after Year 1. Two players have made it to the NHL for a cup of coffee and men like Greg Chase and Kyle Platzer have jumped their draft number in the 17 months since draft day.