A large portion of the Oilers fanbase appear convinced this team lacks passion and preparedness and based on wonky starts it’s a fair criticism. I don’t buy for a minute that the current Oilers are lazy rabble, they work harder on conditioning than the boys on the bus ever did (this is a universal truth btw, if RNH played a 1971 Phil Esposito shift at the modern pace, he’d pass out) and it’s not an argument that holds water.

Many Oilers fans believe the team doesn’t care or is indifferent, that professional pride takes a holiday when the team dons the blue, white and orange. I say bollocks. In some cases (Taylor Hall, Justin Schultz, Ben Scrivens, Nail Yakupov) players are trying to do too much, to hit a 5-run homer. Indifferent? No sale.

What then, is it? Here lies the gap that comes from being a fan. I could tell you with authority (and many fans will say or tweet this today):

And all of those things are probably contributing. You know what isn’t (imo) contributing to losses? Lack of passion or caring. I’m calling bullshit right now on that train of thought. The msm is out for blood on this Oilers team and the ‘lack of passion’ drum is being pounded hard and heavy. Poppycock. 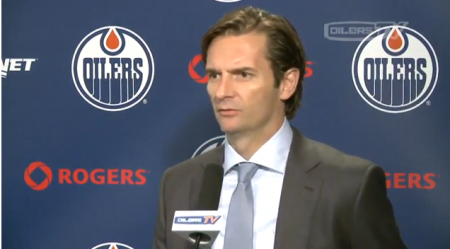 The bottom line on this Oilers team is another season is gone, they let go the rope and are now at sea waiting for the end. What will it look like? My own feeling is that Craig MacTavish is still in charge of the team and is both loyal and intelligent. Casting Dallas Eakins as the villain in this piece is farce-look at this team’s shortcomings and tell me honestly the coach is primarily to blame-and there are some important positives on the ice this morning.

Craig MacTavish will want to call up Anton Lander, Martin Marincin and Iiro Pakarinen soon. Two things are very clear this morning: No help is coming unless Daryl Katz or Bob Nicholson step in (and they may in fact be the ones who have enforced the ‘no fly’ procurement policy).

And Craig MacTavish has a vision for this team that includes Connor McDavid in Edmonton opening night. Daryl Katz’ apology letter will be along shortly, this one with a promise of a 2016 playoff spot. Next stop: World Juniors to see the next great one. One suspects the management meetings surround a center depth chart of Nuge-McDavid-Leon-Gordon next season, with a blue line that includes Oscar Klefbom and Darnell Nurse. What about the Taylor Hall cluster? Well, that’s just yesterday’s papers, that’s just yesterday’s girl. The new Originals are in town.

It is incredible and it is exhausting and it is here. We’re sailing to the Hinterland again friends. Pack a lunch, its a poke.

A TURN NORTH AT THE DRAFT TABLE?

FORENSIC FILES: AT THE DRAFT

THIS MUCH MADNESS IS TOO MUCH SORROW
MAYBE I’M AMAZED