Mitch Moroz is a very famous prospect among Oilers fans for a couple of reasons. He was selected early in the second round of the 2012 draft when Bob McKenzie ranked him No. 56 and many fans never forgave team or player for the perceived sin. I’ve argued for two and-a-half years that blaming the player is ridiculous but the slings and arrows continue. The other reason he’s famous? Moroz was part of one of Edmonton’s rare championships in hockey this century, a breathless run to the Memorial Cup in 2014 spring. What do those two things tell us about Moroz the player? Not one damn thing, actually.

I swear that a lot of thought goes into these lists but the hockey Gods mock me by choosing No. 18 overall to present a list of men who managed to play in at least one NHL game. These are all role players (Rita aside) but credit where due they found a way. Mathieu Roy was a personal favorite, I’ve never seen a hockey player more hellbent on getting himself hurt—and I saw Marc Pouliot!

Moroz dominated junior at 19 but as we say those kids should do exactly that against younger opposition. The early struggles of Moroz in the AHL are somewhat predictable (he’s not going to get a push on a skill line because he isn’t the best option) and his TOI estimates (below) suggest he’s getting little ice time so far. It is important to keep in mind that successful players find a way to move up the depth chart in year one. Luke Gazdic went 2-0-2 in his first 24 games, Curtis Hamilton went 2-5-7 in his first 24. If Mitch Moroz is going to play a regular shift with skilled men, he needs to show some offensive ability this season. It’s early but the TOI is a concern.

The Oilers spent a very valuable pick on Moroz and he developed well during his junior career. We’re at Christmas of his first pro season and by Eric Rodgers’ estimate the young man has played less than 3 AHL hours so far this season. You can’t develop players that way but you can send them to the ECHL for big minutes. If the Barons can’t find a way to get Moroz ice time, it’s the best thing for the young man. If the Oilers aren’t offering, he should ask for the demotion. Career progress won’t come via riding the bench. 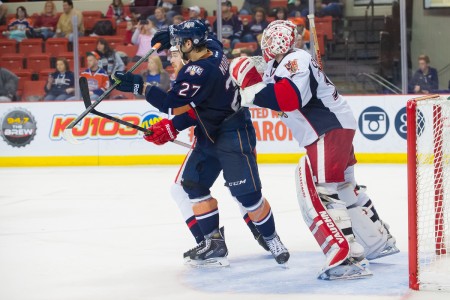 The Oilers are a strange organization in development (we know this) but it seems as though the scouts, minor league coaches and management aren’t thinking along the same lines. If they brought the ECHL into the conversation—maybe 20 games on the top line in Bakersfield and then a 10 game stint with regular shifts in the AHL—could it help a player like Mitch Moroz? I think it’s worth a try. As it is, if Rodgers’ TOI estimates are true, Edmonton is wasting a development season on a second-round pick. 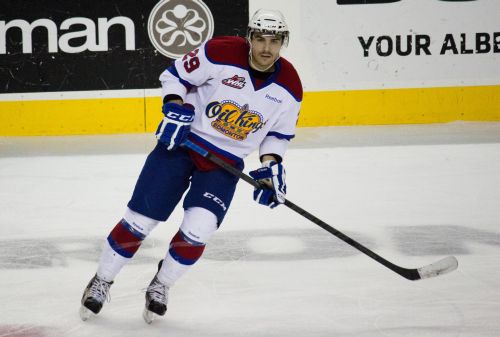 The 2012 draft (like the 2014 edition) has some unusual arrows. ONE player Edmonton drafted in 2012 has enjoyed what we might call typical progress. Nail Yakupov’s rookie year was his best, Moroz was in a shutdown role for a year after draft and then blossomed in his final junior season before playing a part-time role in OKC. Jujhar Khaira has size and speed but has been offensively challenged since draft day. Daniil Zharkov may or may not exist in real life, Erik Gustafsson is no longer part of the organization and John McCarron has been on the outskirts of the prospect list since 2012 (we have no idea if he’s going to sign).

Joey Laleggia stands alone as the one member of the 2012 draft who has progressed in a normal fashion.

Mitchell Moroz has power, speed and size but the question is (and has been) his ability to play with skill. The Oilers (so far) have chosen to slow play his development, one suspects (partly) because of their disregard for the value of pro at-bats. There may be a hesitation on the part of the player to go down to Bakersfield but that’s one way to improve. Moroz began this season a little behind and is now playing sparingly and it’s completely possible he’ll spend the season in this part-time role. It is a very poor way to develop a player, especially with 15 minutes a night just waiting for him in Bakersfield. Once it is established the AHL coach will not play the winger in a feature role, the organization owes it to themselves and the player to get him to a place he can succeed.

This is an important season for Mitchell Moroz. I’m not sure the Edmonton Oilers are treating it that way.