Do you remember those two draft day trades that involved Los Angeles and St. Louis? How did they work again? Who won? Well, who is winning? Why do we care? Well, it was an early Craig MacTavish trade and since he’s being evaluated in the forensics department let’s have a lash and see what this thing looks like under the hood.

It’s basically (for Oiler purposes) Valentin Zykov for Bogdan Yakimov, Anton Slepyshev, Jackson Houck, Kyle Platzer and Aidan Muir. I like to include William Carrier in our look-see (and did it last time) because it’s part of the thought process that went into the deal and it’s fun to see how things are working out.

This is pretty much exactly what the bets were on draft day from what I can see, and they remained that way in draft +1 season (2013-14) according to the NHLE’s. I know the limitations of the equivalencies, but they do offer an effective line in the sand for grading out prospects from different leagues. It isn’t a guarantee but it’s something.

In the 2013 draft, Edmonton GM Craig MacTavish dealt down twice, both times passing on a player who projected (in their draft seasons) to be a better NHL prospect moving forward. In exchange for doing it, the Oilers:

Year one complete Edmonton was running in place, their men behind Zykov and Carrier. Let’s have a look at how year two is going.

So far this season, Kyle Platzer has been on fire and it’s reflected here. Zykov is exactly where he was one year ago in NHLE but the Platzer has enjoyed a breakout year in the OHL (remember he was obscured in his draft year playing for London, a deep team). 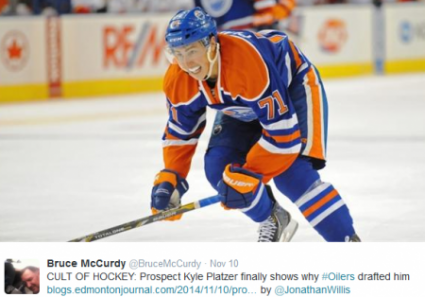 Here’s how I look at this deal: I’m happy with Yakimov as the proxy for a second-round pick (seriously, he’s an excellent prospect despite the AHL boxcars) and with Platzer as a sweetener this trade is looking good for Edmonton at this time. Last time we looked at this deal I wrote:

This time, a slight change: The coolest bullet in the chamber may be Zykov, but the distance between him and Yakimov is not (to my eye) enough to justify the addition of Platzer and Slepyshev. And I’ll linger just a moment longer to suggest the best player in the group may be Kyle Platzer.

See you next time!

RAIDERS OF THE LOST ARK