Our long national nightmare is almost over as our beloved game is returned from the depths of boredom. We’re in a really exciting time now with the trade deadline in sight and callups on the way. Oilers fans are all too familiar with this time of year but there are good things on the way.

It was all over twitter today, Hall’s tweak and the worry, but things seem to be fine now. We talked about him on the weekend, and the gap before and after the injury is very stark:

He did seem to have a little more torque just before the break, here’s hoping Chance returns and Edmonton can make a nice run here in the second half. That top line is going to need many nights of multiple points if this team has any chance to approach 25 wins this season. 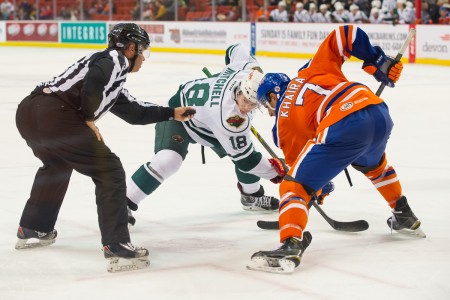 This could come at any time but trades (Petry, etc) and injury may mean recalls to Edmonton from Oklahoma City. It’s interesting to see the group of players who have scored well in the last five games before AS break:

The recall of Anton Lander opened up an opportunity for Yakimov (and Khaira), I’m thinking a Pakarinen callup might help a winger like Josh Winquist (who is injured) or the Jones’ boys. As discussed this morning, it looks like the organization sees Brandon Davidson, Dillon Simpson and Jordan Oesterle as the likely recall options, but Hunt and Marincin have been posting crooked numbers in the last five games. It’s a nice problem to have, all these prospects.

Well, we knew it was coming, doesn’t make it fun. I’ll speak with Eric Rodgers about the move and this year’s Barons tomorrow on the Lowdown. This year’s Barons may be the most exciting in terms of future, guys like Pakarinen may be a revelation. You can expect a large increase in Buck Owens references, and we say goodbye to Joe Ely and that wonderful music from Oklahoma.

Strike the Oilers off the list of teams that might have interest in Mike Richards. A simple “No” was the answer to the question about MR.

Makes sense, he’s just too risky with that contract. Richards was a terrific player but he is no longer that player. Dean Lombardi is (I think) the smartest GM in the league but he’d have to be Pollock to make this fly. Now watch, Richards will get claimed tomorrow. By Ed Snider!

88 Responses to "WHAT SHOULD WE EXPECT FROM THIS WEEK?"