On Saturday mornings, our house was quiet. My Dad worked on Saturdays—all the Dads worked the sixties, 6 days a week—and Mom had the house quiet with reading or yard work. I would grab my bike and head down the road (this is Whonnock, up past Thornhill School, past Haney) to various friends and people who were doing cool things. My Grandpa had a great big horse (Tom) but he was working most days too (seriously, everyone worked in the sixties) and the older kids (my brother, my aunt Shannon) were either doing boring things or stuff they’d get in trouble for if I was included (one of those things, climbing in the woodpile near the sawmill, damn near killed me once. I was impaled by a massive nail, no one around. Jesus it was scary, I was maybe five).

Mostly I rode my bike until someone strolled or rode along and then we decided what fun we could have with the day. We did stupid stuff I won’t mention (this was 45 years ago) and every day was different but the same, and perfect. My recollection of Saturdays as a kid (even in fall) was basically carefree living and fun, fun, fun. Around four or so everyone had to go home (it was like a homing chip kicked in) and I’d always go to Grandma’s house. Tom the horse was there but the real pull was Grandma, who (unlike my Mom) was an outstanding cook and baker. She made homemade bread pretty much every day of my childhood and I can still recall opening the door of their house and being run over by the aroma of that freshly baked bread. Always the same: bread with butter and strawberry jam. It was the best thing ever.

Their house was very old, you passed the piano and a bedroom to the right as you walked in, plus the stairs to the left going up to the other bedrooms. A few more steps and it opened up into the kitchen and living room. I did much of my childhood hockey viewing in that room. Saturday nights were hockey nights, with cards and beer and cigar smoke and laughter. My brother would stroll in a little later, then Mom and Dad, my uncle Ross (he was older, and a little dangerous and crazy. He was my favorite) would receive the biggest reaction because it was uncertain he’d be there any given Saturday.

The hockey game was turned on promptly and the big sofa and the chair would be filled for several hours. Grandma had these quilts that were so warm it was sometimes hard to stay awake but the hockey kept me alert. Frank Mahovlich and Dave Keon were my favorites, the older folks liked Johnny Bower and Allan Stanley and every once in awhile the Leafs had someone we’d never heard of (this would gather momentum as the decade wore on and by 1970 you needed a program).

Saturday nights were what I lived for, what we all lived for I think, because the men were home and I got to sit with my Dad and Grandpa and watch the game. It was just a few precious hours but they meant the world to me and I held on to them as hard as I could every Saturday night.

The Oilers brass were in the stands to watch McDavid and Strome but Darnell Nurse turned in an outstanding performance. MacT talked about putting Nurse in the AHL next fall but I’ll believe it when I see it. This guy is exactly what Edmonton wants: A roughhouse defenseman who can wheel. 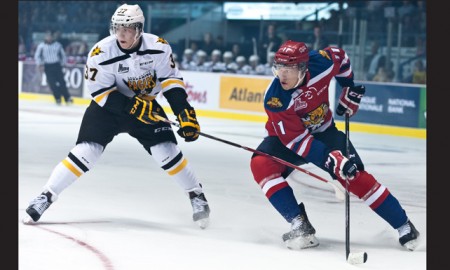 I go back and forth with Strome and Hanifin but the bottom line is 6.03, 187 teenage centers with elite skill are extremely rare. The question I cannot answer? Who is No. 5 on the Oilers list? One suspects my top four is their top four (we’re pondering order) but the fifth guy? I think he’s my No. 21 player. As recently as last night, MacT was quotedin regard to Strome and his ‘considerable skill package‘.

Somewhere along the line the Edmonton Oilers lost their ability to identify useful defensive talent. It was probably at the moment they decided trading Chris Pronger and elevating Ladislav Smid to the NHL was a reasonable idea. They fiddled away Jan Hejda and fumbled and bumbled their way to we are here. There was a time when Edmonton would sign a Steve Staios or trade for a Jason Smith but the latter day management has lost the touch.

The Jeff Petry situation appears to be reaching its conclusion in the days before the trade deadline. MacT spoke of how well Petry is playing yesterday and raved about what an attractive option he would be to a playoff team. Jesus, Mary and Joseph MacT, he’s valuable to the Oilers too! Petry is apparently speaking to his agent this weekend and will have an idea about the direction of his life over the next few weeks.

Pack lightly, Jeff Petry. Oilers fans have no good news here, no voice and no real sense a good result arrives. Your money RH’s are Justin Schultz and Mark Fayne; Jeff Petry is not the chosen one but he is the best one.

And in Edmonton, incredibly, that isn’t enough. Sending away good defensemen at 31 is a crime, doing it at 27? The mind boggles. It is extremely difficult to marry success and Craig MacTavish when discussing this move. He’s making a terrible mistake.

ONCE MORE TO THE WOOD SHED
MAYBE I’M AMAZED