Todd Nelson might be the most important callup this century. Without him, Anton Lander would have one skate in Timra, Martin Marincin would be sailing the Slovak Sea and God knows who would know about the dreaminess of Oscar Klefbom. I have real concerns about the Edmonton Oilers ability to identify defensemen—we’ve talked about this many times before—but it may be a more noxious issue. Why did it take Todd Nelson to trust these kids in NHL games? What kind of bias has been at play here? Why are we talking about a lack of defensemen when Klefbom and Marincin look so ready? I’m asking.

The biggest rookie worry? Craig MacTavish. Does he have (coming on) two years NHL experience as a GM or one year’s experience twice. This feels a lot like one of those horror movies where ‘the call is coming from inside the house!”

Todd Nelson now 9-9-2. Oilers first win in OT this year. How often does Edmonton come back from down 2-0? Positive statistics. Whoa.

You cannot stop Todd Nelson. Last night, the following Barons played their hearts out for him:

And yet that’s not really all of it. Nail Yakupov is far more dangerous now and that’s (hopefully) going to continue; Nuge-Eberle have broken out of their funk; Jeff Petry chooses to wheel far more now; Derek Roy is stepping up and mentoring the Russian. Yesterday at practice, Viktor Fasth got emotional and coach Nelson went over to talk to him. The story of that moment is a far cry from the Hall water bottle incident and I think it may show this team’s mental state: They are not walking around on egg shells and appear to be using their heads for more than a hat rack. I know Craig MacTavish is slow-playing the contributions of Todd Nelson, never mentions Martin Marincin’s name and seems hellbent to send Jeff Petry out of town, but he’s losing much of the fan base with this game plan. That was a fun night, one of very few I’ll remember (the NYR game Nov. 9 is my favorite game of the year) beyond the first days of spring. 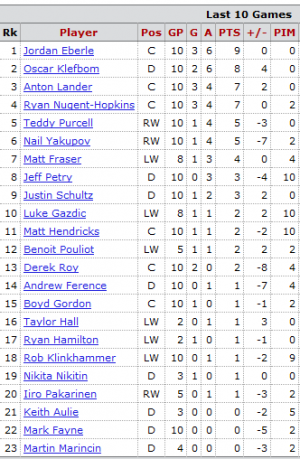 The 2008 (Eberle), 2009 (Lander), 2010 (Hall, Marincin), 2011 (Nuge, Klefbom) and 2012 (Yakupov) draft are all represented here. The Klefbom and Lander offense is truly incredible based on their resume’s and one wonders how much we can expect from either player in terms of boxcars in the future. For now, it’s completely justifiable to enjoy the now. Todd Nelson’s impact on the roster is also obvious on this list.

This team started 7-22-7 and are 9-9-2 with Nelson solo. I’ve said time and again it doesn’t matter to me if the coach is a dink or an arrogant jerk but it clearly matters that the coach reaches the players and the team has success. 9-9-2 IS success for this team and the verbal (more ‘we’ than ‘I’) is perhaps a clue to how the players feel about the current coach. I understand Derek Roy and Rob Klinkhammer were added but folks the biggest change was behind the bench and it’s pretty obvious things are going well. I think Todd Nelson will be the Edmonton Oilers coach in 2015-16.

@albertaoilfire Todd has been very good for the Oilers. They play with purpose & together. Lander is a solid player & showing it. 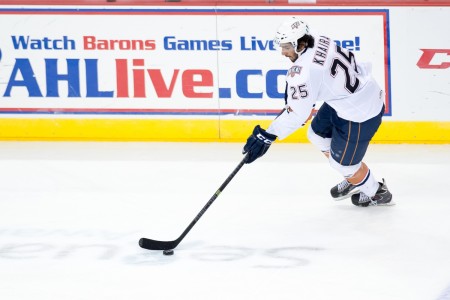 Barons are in action tonight (plus tomorrow and Sunday) so I’ll have an item up at 5 about them. The OKC scoring in the last few games is interesting, including a minor surge from young Jujhar Khaira. He is 2-4-6 in his last 11 games and Curtis Hamilton has the same boxcars in his last 10 games.

We’re seeing fewer mentions in media about the Oilers but I don’t think that has much to do with how much activity we’ll see at the deadline. I suspect MacT will send away Jeff Petry and Viktor Fasth, plus there will be significant interest in Boyd Gordon and Matt Hendricks. Will he get enough return to pull the trigger? Not sure. I also think a ‘hockey deal’ is possible, with someone like Martin Marincin perhaps giving enough value to an NHL team to satisfy an immediate NHL need. I bet Edmonton is interested in Bruins prospect goalie Malcolm Subban but that may be wishful thinking on my part.

10 this morning, TSN1260 Friday on my mind! Scheduled to appear:

A win Saturday and things get interesting. Arizona and Toronto are reachable, Hurricanes and Blue Jackets appear to have recovered. The Oilers (imo) could finish as high as No. 26 overall.

“SECOND PRIZE IS A SET OF STEAK KNIVES”