Jordan Eberle has really stepped up in these Hall-less weeks and it’s reflected in 5×5 scoring since January 1. A lot has changed in the weeks after Dallas Eakins, David Perron and Mark Arcobello left but kid Eberle is enjoying a strong period in the season.

That’s a nice run by Eberle and Roy-Yakupov are doing fine now. Nuge should spike now that he’s spending less time on the PK and of course nothing rhymes until Hall returns. Pouliot had that hot run but has cooled, and Jeff Petry is outscoring Justin Schultz. Oscar Klefbom has been a revelation.

Can’t wait to see this young man at the pro level, Laleggia would be a Godsend as a power-play quarterback. Oilers appear to have scored pretty well in Round Five of the 2012 entry draft.

I’d prefer a skill guy like Nuge to cross the blue under control (not always but most of the time) as we know from the Tulsky lessons that control increases opportunity and success. Hall dumping the puck in 10 times out of 10 is absolutely a misuse of talent—you’ve got a guy who can push back the blue, have him do it! I don’t know if Todd Nelson would be that stubborn, suspect he’d see the value in a possession entry. I’m seeing a lot of dump and chose, though. It makes sense to use both, change things up and dump when there are no good options. Seems to me chipping it in for Hall, Nuge, Eberle should be done less than 50% of the time.

MacT was also watching goalie Matt O’Connor no doubt, he of the solid-to-excellent resume and a possible spring signing. If the Oilers run Brossoit-O’Connor next year in Bakersfield, and Niemi-Scrivens in Edmonton, is that enough? Will that represent a clear upgrade?

Where do the Oilers need additional help in terms of their prospect list? Well, aside from goaltending there are a few places they could help themselves:

A few centers can play wing (Chase as an example has spent significant time on wing) and I have left out several prospects in the interests of clarity. Oilers areas of need include goal, left wing, right wing and you can never have too many defensemen. The issue on wing was less an item when Hall and Eberle had Perron in the band but now we’re probably looking at a winger needed for next season (Hall-Eberle, Pouliot-Yakupov, Hendricks-Klinkhammer, ????-Purcell). Leon might be the best option. Seriously. 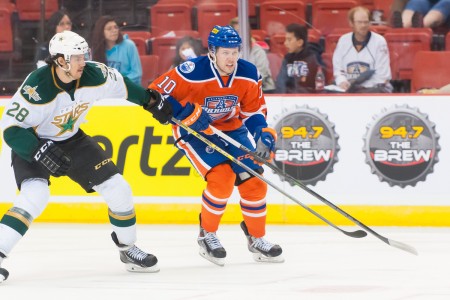 The Barons play today so I doubt we’ll see a callup but a trade could happen at any time. I also think Matt Fraser may be in danger of losing his roster spot (Curtis Hamilton?) and the club could probably use a center for the Lander absence. We could see a very active transaction window this week for the Oildrop.

At 10, TSN 1260. The march toward madness continues! Scheduled to appear:

The author didn‘t add any Information to his profile yet.
Related Posts
STANDING ON THE SHORELINE