One of the things the Edmonton Oilers have to do this summer is evaluate their cluster in order to make sure this is the group moving forward. It’s a gifted group but there are issues for each player:

These are important issues and a mistake in any one area will damage this team’s chances in the future. The club has some other pieces (Pouliot with Leon and Darnell coming) but that’s the center of the cluster there. One more piece to go!

There was a second I thought MacT was going to hit the ground, but Craig was on it. #Oilers pic.twitter.com/IcoIrBs73J

Some movement on the list this week, there are a bunch of players pushing for the top 10 now (9-15 is basically interchangeable at this point imo) and there’s lots of track left to go. A reminder, this is a fan’s list, relying heavily on math and those young men who control the puck at junior levels. The more I stare at this problem, the more obvious it becomes: If a forward or a defenseman lacks top-end skill in junior he’s not going to make it in the NHL. 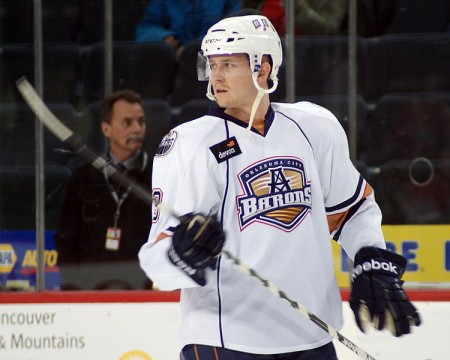 We should also talk about the possibility of MacT getting squeezed out at the deadline. News this morning that John Moore may be available and  the same article quotes the Flyers as looking to sell more defensemen. There’s a chance the window closes enough to force MacT’s hand, either in getting a lesser pick or prospect or in signing his defenseman. Teams still likely interested based on what we hear: Detroit, Tampa Bay, Montreal and possibly Anaheim.

The Blues typically manhandle Edmonton, home or away. The big wingers grind our Chorney’s into a fine white powder, walk away with two points and fill our IR for weeks. Bastages! I have no idea what the Blues will do at the deadline but they don’t look like Stanley winners from here. Men I’ll be watching: Klefbom, who’ll need to skate miles and keep his head up; Marincin, who faces the grittiest group of big wingers this side of the Pecos.

Are the Oilers going to get a goalie this deadline? They grabbed two last season and there are rumors a-foot that Chicago is making Antti Raanta available. If true, I really like the idea in that it probably means MacT isn’t planning on blowing his brains out on Antti Niemi in free agency. Stay the course, MacT, you weren’t wrong last summer it just didn’t work out. There’s a difference. Stay the course. And sign Petry, please.

BECAUSE MCDAVID, MONDAYS WILL NEVER BE THE SAME