The Edmonton Oilers host the Toronto Maple Leafs tonight, in what may be the first game of ‘you take it, no thanks’ hockey between the two teams. GMs on both sides of the ice won’t be actively cheering for a regulation loss but that result would be very helpful. The current standings have the Leafs and the Oilers in the impact player area and a little luck might change the destiny of one of these once proud franchises.

This is the treasure map, ladies. Toronto must shoot blanks for 12 more games in an effort to own the No. 4 option heading into the lottery. That seems easy enough—they look like the concept of the game escapes them many nights. Edmonton has mastered the ability to lose actual motor skills on the ice and have a legit shot at No. 30 overall. Although the prize is larger for the Edmontons, it’s also true that Arizona no longer serves solid food to their troops and have taken their boots. This could get bloody before April. If I’m a betting man, the season ends:

which will be followed by New Jersey winning the draft lottery.

PLAYERS CARDS, FORWARDS (STATS.HOCKEYANALYSIS, BEHIND THE NET, WAR ON ICE)

These numbers are always interesting but never moreso than the final days of the season. Eberle has done fine work late season and the Nuge has done some recovery work, too. Anton Lander’s first real crooked numbers are here, he’s okay at 5×5 and crazy 5×4 (that’s via War-on-Ice which is cheating but he doesn’t show up yet at StatsHA). I’d love to see Yakupov hit 35 points before the end of the year but this little run has been fun no matter the rest. We all talk about the good works of Gordon’s line but I wanted to point out that Teddy Purcell hasn’t been playing with Gretzky/Kurri and he has 28 points on what has basically been the third line.

PLAYERS CARDS, BLUE (STATS.HOCKEYANALYSIS, BEHIND THE NET, WAR ON ICE)

This is sorted by Corsi for, Oilers are interesting because the ZS push and soft parade go to Klefbom-Schultz who are the only pairing at 50% Corsi (or so). Is that more impressive than Ference, who gets the tough ZS’s, has a less than tragic Corsi, and manages to post a 5×5/60 in the range with Klefbom? The Schultz pairing needs to deliver more next season with 60% ZS’s and soft competition. That’s kinda nuts, you can’t get a better situation in the NHL. When we talked earlier this year about Justin Schultz being the hill they die on, we were at least partly kidding. Now? I’m not so sure. Coach killers come in different packages.

I think the Oilers will select someone in the top five as listed here, Corey Pronman mentioned last week hearing Edmonton liked Marner a bunch and that’s fine by me. Tonight’s game is bizarro world really, the Oilers are best served by losing and yet this is a very winnable game. If the Oilers are slated to draft No. 3 and Edmonton No. 5, would the Oilers moved down two spots if Bernier was available in a deal? Kadri? I doubt it. The pick this summer could alter this franchise’s destiny for 15 years. Epic. Giants walk among us—and they’re babies! 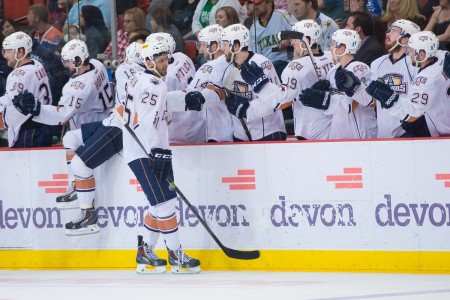 I was asked about this yesterday and will attempt to compile the current list (with RFA/UFA noted). This is an important list because the sheer number of potential contracts coming online is enormous. Blame the 2013 draft, the aggressiveness of Bob Green, the new GM. There will be blood!

I believe that’s correct. Now, the important stuff is how many UFA and RFA’s are on this list and who is coming back. Here’s a very quick glance at the nuts and bolts (Oilers currently at 46 if my math is correct, remember the slide rule deals don’t come into play until the new league year).

So, if Edmonton cast out all of their RFA’s and UFA’s they would have 30 players under contract for 2015-16. We all know they won’t do that, I would suggest the following players will be signed: 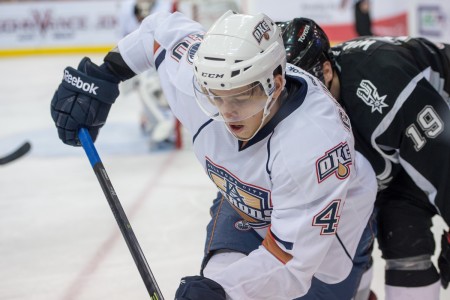 So that gets us to 40. Now, your mileage may vary but that’s not important right now. We can quibble about that later, let’s have a look at the players who could/must be signed and see how quickly this thing rolls from 40 to 50:

It doesn’t take long to get to 50, folks. Edmonton’s 2015-16 50-man list will see major turnover. I don’t think Curtis Hamilton, Matt Fraser, Tyler Pitlick, Andrew Miller, Brad Hunt are locks for the 50. We haven’t even discussed men like Josh Winquist or the Jones boys OR the NHL free agent acquisitions. Major change coming to the 50 man. 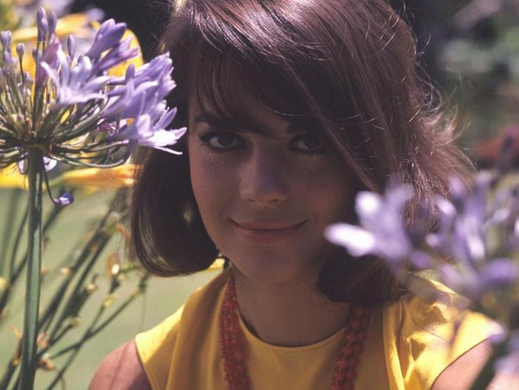 10 this morning, TSN 1260. We start the week with the Leafs in town but also with a new champion in our city! Scheduled to appear: