Interesting article out yesterday at Canucks Army suggesting the cap could come in around $69 million for next year—and that could be very good news for Peter Chiarelli. The NHL will probably squeeze $71M out of the cap for next year, but let’s see how things might roll with $69M as the marker.

If we assume the Oilers plan to start as they mean to go, there’s some money we can save right off the top:

Those roster spots now open, and with $69 million bucks to spend, let’s look at the cap hits for the established players.

That’s $8,888,000 million for the three players, with only McDavid guaranteed a roster spot. Let’s proceed in that way, with McDavid the only impact rookie added to the group and the other two in the minors (both Nurse and Draisaitl could be recalled early but it would help if Leon’s bonus opportunities burned off in Bakersfield). That puts us at 17 players, $55,057,000 allowing shopping for 6 players with $13,943,000 in room. There are some internal options but let’s see if we can find the major pieces before moving forward. By the way, much of the information in terms of cap is courtesy Jonathan Willis and his article here. I would also refer you to Jason Gregor’s article here, in which he said “my sources told me that Seabrook would have no problem coming to Edmonton.” We’ve talked about Seabrook for some time. Smoke, fire. The ‘Hawks may have other ideas.

Now. We’re not going to worry about the asset cost for Seabrook, and maybe it’s another player that Peter Chiarelli acquires for that role. We’ve reached 23 players, and the cap total is $66,592,000. That leaves $2.408M for space and that’s not much at all—assuming $69M cap hit.

The Brian Elliott idea comes from the truly brilliant Sunil Agnihotri. Seabrook and Elliott are not presented here as THE solution, but rather as A possible solution to Edmonton’s issues. Maybe the Oilers grab Elliott and Jay Bouwmeester in a blockbuster. It does show that it is possible to address the two major needs (1D, 1G) without buying anyone out. It also suggests the club can’t afford both McDavid’s and Draisaitl’s bonuses toward the cap. You may ask yourself ‘what are they giving up to get Seabrook and Elliott?’ and I will say that wasn’t the intent of the exercise but you’d have to bet heavily on draft picks and prospects in this scenario. I don’t see Marincin being here in the fall, but put him on the list because he’s one of the six best defensemen in the organization. 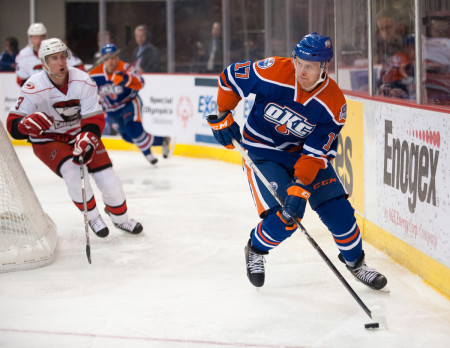 With the news yesterday that Marco and Jackson Houck would not be signed, we can close the book of missteps at the draft table from the MacGregor era (Bob Green era straight ahead). There were some significant misses, none bigger than Roy:

It’s unfair to call these draft busts—Marco Roy could go on to a perfectly good NHL career—but it’s a failure of the procurement department (imo) to spend a No. 56 pick in a good draft year on a guy they didn’t consider worth signing. I remain undecided on who is to blame—player or team—but it wouldn’t surprise me in the least if Roy managed to establish himself as an NHL player in a Riley Nash kind of way.

The good news is that the 2013 draft looks like it will produce some NHL players. From that draft are signed men Darnell Nurse, Bogdan Yakimov, Anton Slepyshev, Kyle Platzer, Ben Betker and Greg Chase. That’s six signed players from one draft, the most by Edmonton since 2011. Not mentioned in all of this: I think Edmonton had to sign John McCarron too, although there might be a later date for college men (I don’t recall).

NOT SIGNED FROM 2013 DRAFT (AN INCOMPLETE GUIDE)

This is courtesy Brennan Klak on twitter. Anyone there you like? Clapperton had some interesting numbers. I think Roy gets signed by someone, we’ll see how things go. The teams that dumped players include good drafting clubs, but No. 56 overall stings for sure.