Peter Chiarelli poked a hole in the Eastern Conference 36 days after taking over as Bruins’ GM. By plucking Zdeno Chara in free agency, he effectively changed the decade for two teams and impacted all of the clubs pushing for Stanley. Now, almost one decade later, he’s looking for an impact blue to puncture the other conference and set free Edmonton’s department of youth to plunder California and the rest of the west.

If the Oilers are looking to Boston for a defenseman, it’s going to be way easier to pluck one of Zdeno Chara or Dennis Seidenberg from Peter Chiarelli’s old team than find a way to acquire Dougie Hamilton. Question: Is Chara worth it? 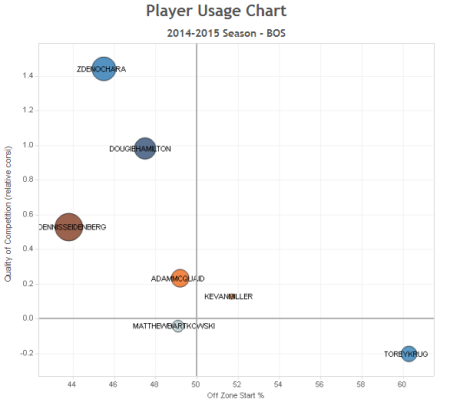 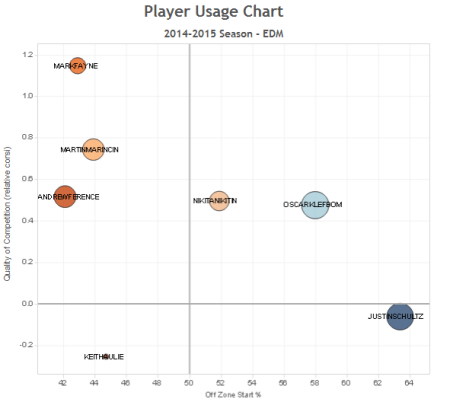 Interesting to see the similar roles for Marincin and Hamilton here, of course with differing levels of success. Ference was (basically) playing the Seidenberg role for Edmonton last season, I don’t believe either of them should be getting those tough ZS’s at their respective ages. Chara is a different matter, he could be helpful in several areas:

Is it worth $6.917 times three? I don’t think it is, not for a team like Edmonton—Chara’s not a guy who you bring in for a rebuild, he’s a guy you bring in to put you over the top. Man he’d be a nice add for next season, though.

It’s a wonderful thought, Chara against the Western Division circus and the jackals of the Pacific Division. Sadly, he’s not for the Oilers, who are destined to contend at the end or after Z’s current contract ends. He might not be in Boston for long, though.

If the Bruins were to send Chara over in exchange for just cap room? I suspect someone will come along with a better offer. Hell, Detroit may trade for Chara and get a decade out of him. Seriously.

I’ve done my due diligence and EVERYTHING that comes back to me about Bob Green is positive. His procurement track record is splendid (in terms of WHL acquisitions) and it’s probable the Oilers are about to add several quality prospects if Green, Stu MacGregor and Scott Howson can cobble a strong list together and have the courage of their convictions. Jason Gregor’s article at ON on Green and the draft is a must read. Two items:

Meaning the first four or five picks will come from Bob McKenzie’s first two rounds (suspect there are players on Edmonton’s list that didn’t make McKenzie’s but that’s par for the course). I think it’s completely reasonable to assume the top four picks will be risk averse (say McDavid, Svechnikov, Dermott, Pilon) and inside normal based on McKenzie’s list. I don’t think the Oilers should give one damn pick to a “scout with a passion for a player” ever again, and by God if the team picks a BCJHL kid he better be bloody good.

Amen to this. If you look at the Oilers drafting 2008-2014 there’s a lot of size that simply could not play (Hesketh, Abney, Moroz, Khaira) with skill. That isn’t the fault of the player and I’m willing to accept the scouts may have been delivering what the GM wanted (some evidence here as MacT’s addition to the puzzle found the team drafting Nurse, Yakimov, Slepyshev, Draisaitl as their ‘size’ additions) but the results simply weren’t there. Of course we know there’s a difference between saying ‘you want to find big guys who can play’ and doing it, but at least we’re seeing some verbal that matches reality. There are some players inside the McKenzie top 60 who look to have the kind of skill/size combination or projectable size Edmonton may be looking for when it’s their turn. We may see Svechnikov (6.02, 199) who looks like a horse, or young Joel Eriksson (6.02, 180) who can probably add some weight and plays the kind of style Edmonton will be attempting to acquire.

I’ll have my top 120 up tomorrow morning, adding in overagers and players from the hinterlands. It will be pretty close to the final list (not much will change) but I’m still trying to track down the NHL combine vital stats and that may impact things.

THE EDGE OF NIGHT