The Edmonton Oilers offices must be having some bewildered conversations these days. I can imagine a wry smile from Todd McLellan and Peter Chiarelli as they discuss how to improve the defense, with several naughty punch lines available depending on who else is in the room. The Oilers under Kevin Lowe, Steve Tambellini and Craig MacTavish went to market with the best of intentions each July 1 and came home from the forest with some very ugly Christmas trees. Remember Cam Barker? That was a mellua hess as you’ll recall.

Oilers’ GMs enter into the fray willing to pay a million more and tack two years onto a deal and NHL agents annually shoot fish in a barrel when it comes to negotiations. “My client will come to Edmonton, but he needs two more years and another million” might go the conversation, and that’s how you get where we are today, ladies and men. Of course, it doesn’t help when your AGM talks you into $9 million on a faulty saloon door, as happened around this time last spring.

Peter Chiarelli is going to have a very difficult time keeping Darnell Nurse in Bakersfield for longer than a cup of coffee. The club’s blue line is fractured—and as an added bonus, wildly expensive—with only (it appears) the passage of time as its friend. Let’s look at the Oilers defense as it was deployed and performed from January 1 to season’s end (all numbers via War-on-Ice, explaining the TOI). 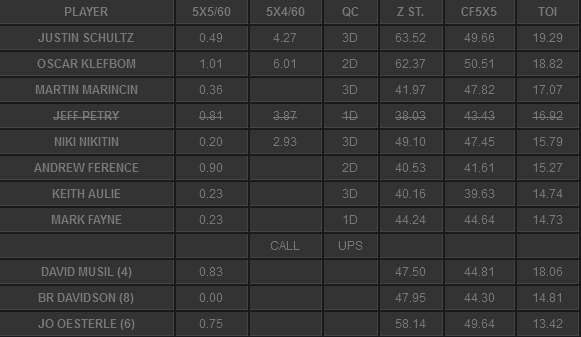 This is sorted by time-on-ice and there’s a lot in here so allow me to point out a few things.

As for the others, Aulie remains unsigned and the three Barons are likely to play in both Edmonton and Bakersfield this coming season. I will say that all three showed some signs of being capable at the NHL level, specifically Brandon Davidson. If Chiarelli deals Martin Marincin—a mistake—it’s Davidson or Nurse for that role next year.

I think the Oilers should:

The key here is retaining Martin Marincin while getting out from under Justin Schultz. Davidson might force Ference to the pressbox by Christmas, Darnell Nurse first callup, still bet he gets less than a full cup of coffee in Bakersfield. Thoughts?

WILL CAM TALBOT BE AN OILER BY SUNDOWN? (DARMOK)

HAMMER ON A DRUM