I think Darnell Nurse is going to have a say this fall and there are going to be tough decisions to make on Kingsway. I’ve said many times (here and on the Lowdown) that Edmonton would have to make multiple moves in order to force Nurse to No. 7 on the current depth chart. They haven’t done it yet. Before the draft, in a post called The Gap, I wrote the following:

They have added three pieces (Andrej Sekera, Eric Gryba and Griffin Reinhart) and Nurse remains (imo) inside the top six options for 2015-16. The Oilers depth chart is completely out of time if we list the group by cap number:

The Oilers have three veterans (Nikitin, Fayne and Ference) making $11.375M and two youngsters (Schultz, Reinhart) who could make $6,888,000 (or more) if they can cash all the bonuses. The possible “value” contracts in this group are Darnell Nurse, Eric Gryba and Oscar Klefbom, with Andrej Sekera the lone veteran seemingly poised to earn his keep this winter.

Chiarelli spoke highly of Sekera as a potential top pairing guy if need be, but a "linch pin" on the 2nd pairing. He's not done. #Oilers

That’s an awful defensive seven and yet the players excluded on the original list (Nurse, Reinhart) are the ones who can be sent down without waivers. 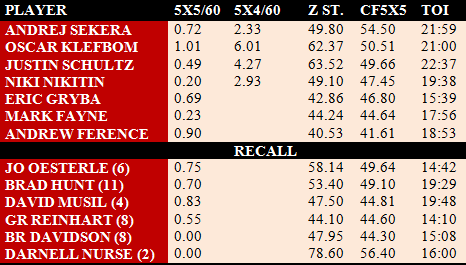 This is sorted by Corsi For 5×5 % and also includes ZS’s and scoring, along with average TOI per game. Looking at these numbers, I think the idea of Sekera and Klefbom as 1-2 LH blue makes the most sense (as above) but the right side might need a little shake up. What about this?

Among callups (and you can see by the GP this is very small sample size, it looks like Reinhart might be first choice for drastic ZS’s and maybe Musil and Davidson would also be candidates for that role. Nurse was used for only two games, but I’d say his role may also be more defensive, which (for me) suggests that the third pairing might be the best plan for tough ZS’s. We know Darnell Nurse had a shut down role at the WJ’s and in the OHL and we know from reports he played (and played well) in the big minutes of the game in OKC:

Peter Chiarelli can do us all an enormous favor by making another deal, but for me Nikitin is the logical choice for odd man out, and Darnell Nurse might be the best choice for rookie to keep. I’m not sure that fits well with anyone reading this, but welcome your input.

As an aside, have I ever mentioned a three-for-one deal?