Peter Chiarelli is the General Manager of the Edmonton Oilers and many of the players who were here before he arrived are (for the most part) on borrowed time. We talked about ‘Chiarelli’s men‘ the other day and they include the seven players he brought in (Talbot, Reinhart, Gryba, Sekera, Letestu, Korpikoski, Nilsson) plus Connor McDavid and the other draft picks (Jones, Bear, Marino, Svoboda and Paigin). There’s also the ‘keeper group’ (my guess is Hall, Nuge, Eberle, Draisaitl, Pouliot, Klefbom, Fayne, Nurse) and a few bubbling under contracts who have shown value like Laurent Brossoit, Bogdan Yakimov, Greg Chase and Anton Slepyshev.

Is there a group of outcasts? Players extremely unlikely to be here in a year? My guess, is yes.

That’s a baker’s dozen who should be viewing this season as a vital one in terms of their Oilers’ future. I wouldn’t be surprised to see two or three of those names (Gernat, Nikitin) to be taken care off/playing in Europe this fall.

A LITTLE MORE ON JOHN MARINO 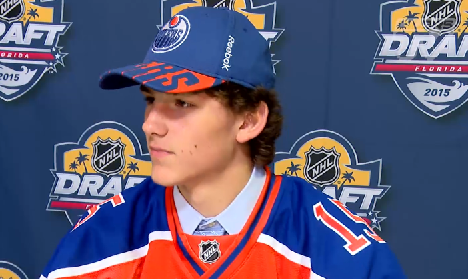 I was impressed with Marino’s overall game from the orientation camp:

If we look at that RW depth chart above, there’s no spot for Miller. Eberle will take the lion’s share of the skill minutes, with Purcell and Yakupov fighting over the rest. Klinkhammer, Pitlick and Pakarinen are in the mop up roles (well one of them) and Miller is down the road in Bakersfield (after clearing waivers, and that may not happen).

There is a significant ‘other side of the coin’ here and the Oilers may look at Miller as a substantial option. He’s not a big man, but is smart, skilled and has speed. The Oilers will be looking for complementary players who can flourish with their impact forwards, and they’ll also be looking for value contracts (Miller’s deal is for $630,000) that help with the cap. He has become an attractive option and when Peter Chiarelli and Todd McLellan are evaluating who to keep at the end of TC, Miller’s ability to replace (say) a Teddy Purcell while also being $4M cheaper is going to be a significant positive. It may cost Rob Klinkhammer his job.

Corey Pronman: The 24 year old center is a classic small, skilled college player. Miller displays above-average qualities in terms of his speed, puck skills and overall offensive instincts. In his Senior season especially he showed the ability to consistently create scoring chances and keep the play flowing in the right direction.

He is now a 26 year old winger and has a real chance at the NHL. I think he’ll see both Bakersfield and Edmonton and he could get plucked on waivers.