Lots of chatter on the blog lately about how to handle Connor McDavid as a rookie. Protecting him seems to be a major concern, using McDavid in a secondary, complementary role appears to be a fine idea for some. No. Connor McDavid is an elite, generational talent and he should play a significant role beginning game one, period one.

Fortunately we have some recent history that can guide us in this area. A veteran coach (Tom Renney) had the opportunity to deploy the young and brilliant Taylor Hall in fall 2010. Who did he play with? How much? Against whom?

If the Oilers didn’t want McDavid to play against tough opposition as an Oilers rookie they shouldn’t have drafted him. He is extremely likely to get strong linemates, face  tough opposition, get shoved around and hacked and cross-checked by opponents. Fans of other teams will call him a whiner but McDavid will take some ghastly shots that we will go nuclear over. He’ll survive and then he’ll flourish and by the end of year one McDavid will have a better idea about the rigors of the game. Year two? He’s going to rip it up and the violence will only become more pronounced.

Protect McDavid? How? He’s a target the moment he gets on the ice. Using him for anything other than what he was intended for is a sin against nature, hockey and Stanley. No damn way. If you play him on the third line, they’ll find him. If you nurse him into the lineup, their plan is working.

The one thing I believe Todd McLellan will do? Play McDavid with veterans at the beginning of his career. Hall—Eberle, Pouliot—Purcell/Korpikoski, that kind of thing. Lots of power-play time, lots of O-zone starts. McDavid is wise beyond his years, he is an astounding talent and he’s been hammered in junior for his career there, too. Send back to bubble wrap, this one’s a man. 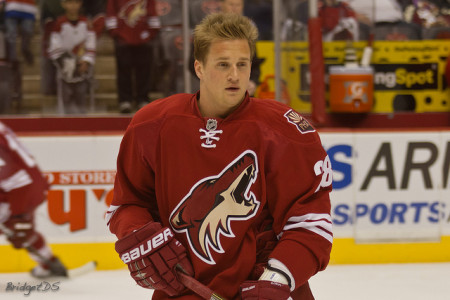 I’m well into the RE series and have to say it’s a far better roster now in terms of balance. For some reason, I do not know why, the Oilers allowed reason to jump right out of their heads when Fernando Pisani left town. Instead of replacing ‘Nando with another two-way winger with calm feet and a mentor’s mindset, they kept shoving strange options out there.

You know, two-way wingers—checking wingers—have been part of hockey ever since the first coach figured out he didn’t have the best player on the ice. For the Oilers to go what amounts to a generation without having a Pisani is simply terrifying. I don’t know for certain that Lauri Korpikoski can be the Pisani for this team, but I do know he was once that player and knows the role. Peter Chiarelli’s summer in many ways has been a case of addressing the obvious, and I thank him for it.

Bob Stauffer during Oilers Now today "Oilers not done, will see how the Franson – Oduya Situation plays out in the next few days" Oilers

Interesting. The Oilers CAN go over the cap if they need to, can’t see Oduya being an option but remain hopeful they’re looking at signing Franson and dealing Justin Schultz. The other thing that could happen? ‘Hawks sign Oduya, re-up Marcus Kruger and trade Seabrook to the Oilers for Justin Schultz, a pick and a prospect. They could even sign Schultz before the arbitration hearing, probably at a discount knowing Bowman.

I know. It’s asking too much. Chiarelli has some of the magician in him though.

185 Responses to "NOWHERE TO RUN, NOWHERE TO HIDE"