I’m not sure how good Jim Matheson’s listening wheel works these days, but when the dean of the scribes tweets, people listen.

If Edm is interested in Oduya, and I'm sure they are, then for sure they must be buying out Nikitin if they sign the Hawks' D.#oilers

Lots of information there for sure. Edmonton interested in Oduya? Hmmm. I like the player, but his age (34 in October) doesn’t really jive with Peter Chiarelli’s summer (Talbot is 28, Reinhart is 21, Sekera is 29, Gryba is 27 and Letestu is 30) and the players who have arrived on the roster. He isn’t a wheelhouse option based on the ‘experienced but in their 20’s’ summer of Pete. 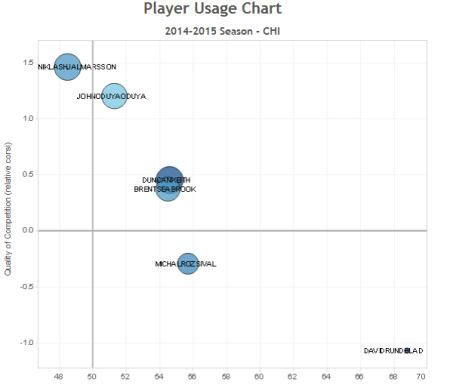 That’s a sweet spot in the Vollman no doubt. Even with the understanding that Hjalmarsson is zooming the pairing, that’s a nice number for a shutdown duo. Now, this is the graph of a team with experience everywhere, familiarity with the system and it’s parts and in their prime. Oduya is not a driver in the ‘Hawks arsenal but credit where due he seems to have righted the ship after some wobbly moments.

I think the Oilers need to aim a bit higher than Oduya to solve their D problem. (chart via @MimicoHero) pic.twitter.com/xCr6kPgONm

Over 51% possession, as mentioned Hjalmarrson zoomed the pairing. I wouldn’t be in favor of a long-term deal and that’s probably where our man is headed, as Matty mentioned later on twitter.

What does this tell us? Something’s up. Jim Matheson may be a little older than you but he’s seen a lot around the Edmonton Oilers organization and if his radar is up, then yours should be too. I remain impressed with Peter Chiarelli’s ability to keep even the truly connected media people guessing, though. Peter Chiarelli doesn’t care about who knows what and when, that’s my read on this. That should make you truly happy as a fan. PC is working. We’ll find out what he’s doing in due time.

118 Responses to "OILERS AND ODUYA"