The Edmonton Oilers and RFA Justin Schultz agreed on a one-year, $3.9 million deal this morning, in what I believe was the best case scenario for a team that could have been exposed badly with this player. Schultz’ substantial offensive talents (he’s quality in the offensive zone) married to mondo minutes and solid if unspectacular boxcars might have been an arbitration nightmare. The money is too much by plenty, but Peter Chiarelli can’t change the past—only the future. The best part of the deal for Edmonton? One year. The option for a second year must have fed the team’s desire to get this thing done.

For the player, Edmonton remains a fantastic opportunity. Schultz has a new coach who thrives on high octane offensive types and should be able to help 19 in areas of weakness. The performance last season had to have been organization-aided and the ‘fresh air’ feel of the current regime may allow Schultz to flourish.

At even strength, Schultz’s offense has been consistent (and those are good numbers). His power-play performance was impressive in year one, but the last two seasons have seen a southbound trend. McLellan is magic on the power play and Schultz can contribute with his talents if given the opportunity (and I think that will happen).

This could be a good day all around. If Schultz improves his coverage and passing, while the organization also puts him in a position to succeed (veteran partner, etc), everyone could be much happier next summer and the real money can pour in. That said, a one-year deal was the play here and good for management and player for recognizing it. A pleasing day.

Are the underlined players the heart of the order (eventually)? I have my doubts about some but it’s not for me to say. Justin Schultz has his contract and a ticket on a helluva ride, but there’s some miles to go. I’ll say this: He has enough natural talent to fly with these eagles and the rest is up to him. 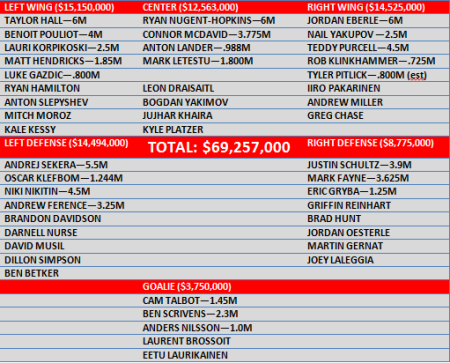 I still don’t think Peter Chiarelli is done. Buyout window may pass with nothing but we’ll know soon enough either way. Beyond that? Will the ‘Hawks deal Seabrook? Will the Oilers find a way to acquire a veteran early or in-season? What about the period just before cap compliance? We’re not far from balance, folks. Balance as we haven’t seen it since 2006 spring. We wait.