The Oklahoma City Barons haven’t produced many NHL forwards but there are some solid reasons for it. Since 2010 (when the Barons got rolling) Edmonton has turned pro several forwards who didn’t enter through the AHL. Among them? Taylor Hall, Jordan Eberle, Ryan Nugent-Hopkins, Nail Yakupov and on it goes.Hard to crack that lineup, folks.

One of the issues that impacted Barons prospects in a big way (imo) was playing time. The 20-year old forwards were brought along by sundial, biding their time and not getting at-bats during a precious development period. By way of comparison, I’ve included one non-Baron in this look at 20-year old AHL points-per-game. This player was drafted by Edmonton (not in the top three rounds) but developed by another organization:

Hmmm. What are the odds that playing time—out of the box—impacted the prospect’s progress? I’d say a great deal. Let’s look at this issue another way. Eric Rodgers is a fine observer of the game and has passed along some estimated time-on-ice totals to me (more to come!) from this past season. Let’s have a look at Bogdan Yakimov, the most promising recent Baron:

Not playing these prospects is a bad idea. Full stop. I’m not arguing that any of the current prospects headed to Bakersfield will have the career trajectory of Tobias Rieder. I’m arguing the Oilers need to give these young men a chance in their rookie AHL seasons to find their way. Wasting a season is costing these young players. 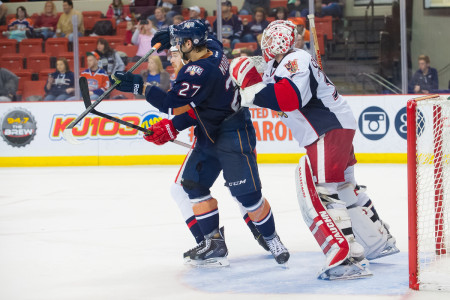 A year ago, I estimated Mitchell Moroz to score 30 points in 70 AHL games. That’s a good total for an AHL rookie of Moroz’ calibre, but he wasn’t going to hit that number on six minutes a night. I think (based on ancedotal evidence) he’s a better player in the AHL than the numbers showed. Eric Rodgers had a look at TOI estimates 14 games into the schedule and had Moroz at 6:44 per game (source). That puts Moroz nine-point season at an estimated points-per-60 of 1.22—not fabulous, but not tragic either based on where he’s sitting on the depth chart. Moroz is a player who may have to make his own luck based on the way things have turned out since his draft day. I’ll tell you why.

WHAT A YEAR FOR THE BARONS!

THE ONE TO CALL