Eric Rodgers has been a guest on the Lowdown many times over the years, and his insight about Oilers prospects in OKC has been invaluable. Along with Neal Livingston and Patricia Teter (plus Jim Byers in the early years), we were able to put together thumbnail sketches of youngsters and their progress.

Rodgers’ work extends to the very interesting work of estimating ice-times based on who is on the ice when goals occur. Using goal tallies as a proxy for icetime goes back some time, with the brilliant Iain Fyffe leading the work I’ve found online for 15 years and more. Eric was kind enough to pass along his estimates for this past season and I thank him for it. I’ll be speaking to him next week on the subject and will update when we suss out date and time. Now. The good stuff! 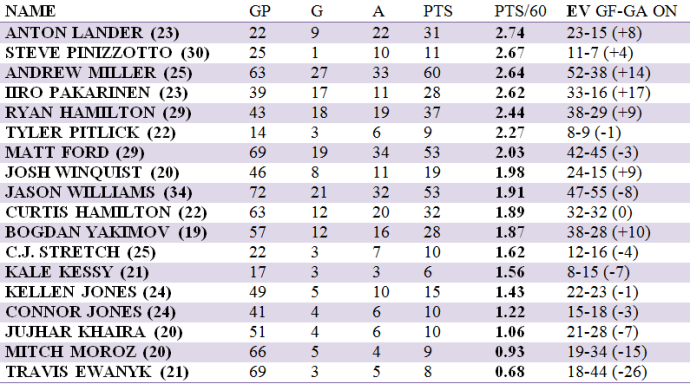 In reading Supernova’s work, it’s interesting to see how many NHL teams employ significant numbers of AHL veterans to provide cover for the kids, while mentoring them. In Edmonton’s case, the forward group seems to have many more of this player type than the blue. If we count Ryan Hamilton, Jason Williams, Matt Ford and Steve Pinizzotto as veterans, that’s 209 man games over the year—and these are feature roles. The AHL schedule is 76 games, so OKC basically employed an ENTIRE skill line of AHL veterans (76 times 3=228 games) in 2015-16. I think that qualifies as excessive.

Using Rodgers’ numbers (I have not published the TOI totals out of respect for Eric, when he publishes I will link) the TOI estimates are even more stark. Williams, Ford, Hamilton and Pinizzotto total an estimated 4,385 minutes based on Rodgers ciphering. If we multiply the three forward positions by 60 minutes (OT not included here, no idea how to estimate) and 76 games, we get 13,680 minutes of playing time. The veterans listed above occupy 32% of the available ice time, creating an even more stark viewpoint on the veteran/prospect issue. Even if we add 300 more minutes for OT, it’s still over 30%. And of course these are prime minutes, very dire.

The Oilers have an issue with veteran forwards robbing prospects of playing time at the AHL level. We knew this, Eric Rodgers information brings the issue into sharper view. I thank him for it.

Note: I will publish TOI estimates at a later time, and will do a post for ‘prospects’ like Platzer, Laleggia and others in the next few days.