It’s a wonder these kids with the mammoth boxcars don’t get drafted. Alexis Loiseau signed a pro contract with the Bakersfield Condors this spring and he has a real chance to make some noise in California beginning September. Loiseau is a very skilled center and romped through the QMJHL season scoring at will. I saw him at the orientation game, creative, quick player, seemed to have good speed as well. Small sample size, and of course everything’s a blur, but he’s a good pro prospect.

That’s some very nice company. Loiseau scored a bunch on the power play but is far from a one trick pony.

He’s a very skilled player, we’ll find out about the rest during the next few seasons. The key item for Oilers fans is this: The team is gathering some terrific players with AHL deals and that’s a very good thing. Now, let’s not get ahead of ourselves, there are no Wayne Gretzky’s available in this part of the procurement pool. However, there are good players who come into the pro game via this door and a recent example (Mark Arcobello) chose Edmonton’s pipeline to make his way to the NHL.

Loiseau has work to do and may never sign an NHL deal. That said, among this year’s Arcobello’s I think this is the best bet to have a real pro career. Lordy he’s got skill. 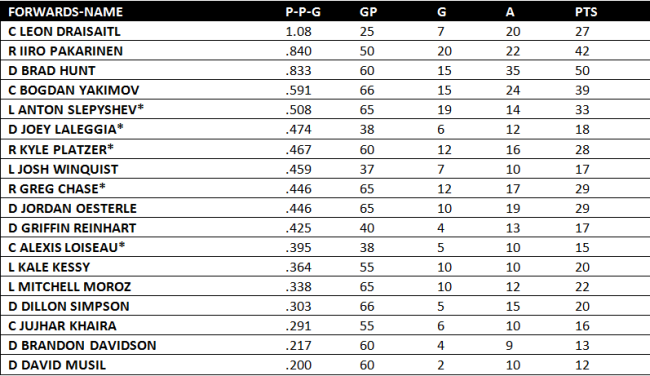