The Los Angeles Kings signed Christian Ehrhoff to a sweet, sweet deal today and the rich got richer. For Edmonton, it’s down to one man left on the free-agent trail who could absolutely help their defense next season. Cody Franson. Back in the days leading up to free agency, I pulled the group of ‘good fit’ defensemen together and put them in a line:

Edmonton signed one of the top options (they’re listed by Corsi 5×5 but any number of these solutions would have sufficed—I am pleased they grabbed Sekera) and most of the others were off the shelves in the opening hours. Ehrhoff (until today) and Franson (who remains) spent the summer without a home, and now that one tumbler clicks perhaps we’ll see another.

Would it make sense for Edmonton to sign Franson? Sure! He’s an upgrade over Justin Schultz and young enough to grow with the group and hang around for the good times. There are two issues:

I don’t think the Oilers would make those moves, not now, not this season. I’m absolutely unsure Schultz is going to have a long career in Edmonton, but my guess is the management wants to see the young D with Todd McLellan at the helm for a year and then decide. Timing can be an absolute bitch, because Franson is a damned fine solution for what ails the Oilers. He’d be a genuine help 5×5 and is superior to Schultz at evens. Franson was speaking to six teams last time we had news, suspect he’ll end up in Boston but it would be a very nice back to school gift for Oilers fans. 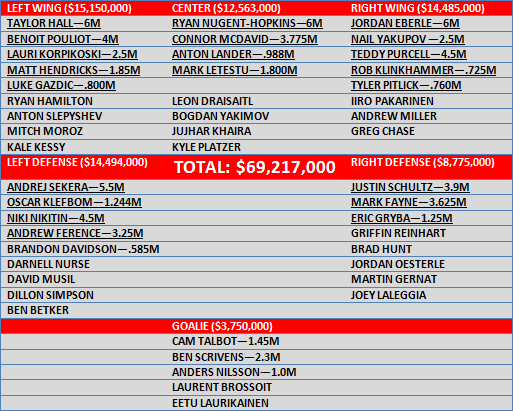 42 Responses to "CODY FRANSON AND THE LAST CHANCE TEXACO"