The Edmonton Oilers will probably have more games played by rookies than a year ago, but there’s an explanation. In projecting the roster during the RE series, it looked to me as though Edmonton would make room for one forward (McDavid) and find room for one defender (basically dividing one full defensive slot among rookies Darnell Nurse and Griffin Reinhart. I still feel the same way, but let’s have another look at this group and see if we can find a way to wrestle more at-bats from veterans. 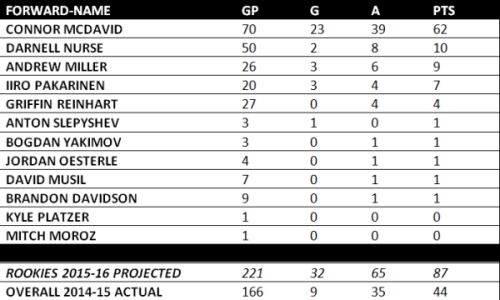 The McDavid spot is a given (I nicked him some GP because he did lose some time in junior) but the rest is up in the air. Let’s go one by one.

The last man in the baker’s dozen of rookies I predicted is Laurent Brossoit. I have him playing three games this season. Is that total enough for Connor McDavid to win the Calder Trophy? Maybe. I hope he wins it going away, with the best rookie season since Crosby (or before).

31 Responses to "LOTS OF ROOKIES, WITH AN EXPLANATION"