In the days after the rapture, we discussed the future at center for the Edmonton Oilers. It’s fairly obvious the 1-2 punch of Connor McDavid and Ryan Nugent-Hopkins has the potential to be elite for a decade or more and after that Edmonton has several bona fide complementary centers. Anton Lander is too new in his NHL career for us to call him ‘Marty Reasoner’ but he does have the range and the intelligence to eventually fill a two-way and mentor role on this team—he’s already regarded as a leader on Team Sweden. Mark Letestu is going to play the ‘Swiss army knife’ role Dallas Eakins wanted Lander to fill (that’s my opinion) and those four men should take the majority of the at-bats in the coming season.

In actual fact, the top two centers may take close to 40 minutes a night, meaning all others are fourth line or bit players. For that reason, I think we’ll see one or both of the lower centers move to wing at times and play significant roles on special teams.

What about Leon? Well, it looks like he’ll get a chance to show his ability in TC on the wing and honestly that’s a pretty good call from here. I would caution you about ‘three scoring lines’ because I don’t think we’ll see it but we might see ‘two scoring lines and a pretty damn good possession line that chips in goals’ if Leon can join the party on either wing.

We’ve been able to track Bogdan Yakimov in two leagues over two seasons now and the results are encouraging. Let’s quickly set the scene with a draft day scouting report.

Pronman had him No. 73 overall. I look for two things in prospects, range of skills and unique skills. Well, you can’t coach 6.05, 232 and the Oilers don’t have ten miles of puck protection forwards. Also, Yakimov’s offense is sufficient for him to clear other young players (basically Khaira) who may in time apply for the same NHL job. 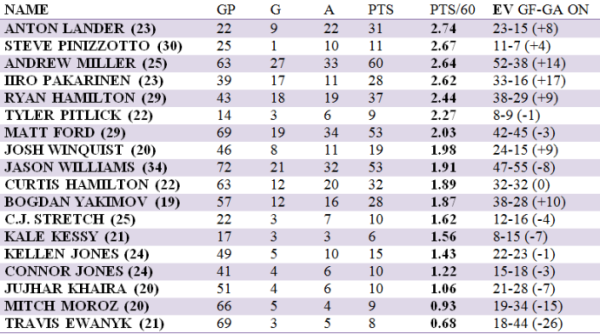 Eric Rodgers from Tend the Farm did the hard work of estimating time on ice for OKC Barons last year and it shines a very interesting light on the organization’s rookie forwards in 2014-15. Among forwards, Josh Winquist and Bogdan Yakimov look like the only two new hires who we can project as being legit NHL prospects in terms of offense. The other rookie forwards (Jujhar Khaira, the Jones boys, Mitch Moroz) didn’t hit the ground running at the AHL level and would need a major spike in performance over the length of their entry level deals. Yakimov? He’s posting at a solid rate and by my count is No. 3 among C’s (Lander, Williams) in terms of his points-per-60 estimate. It’s also interesting to note how well his team was doing (38-28) when the big Russian was out there.

Yakimov’s offense—while not close to nuclear and several towns away from McDavid, Draisait, et al—suggests there’s talent there and he may be able to establish himself as a role player in the NHL if progress continues. Added to his range of skills and his unique abilities and we’re beginning to make a strong case for the big man.

Matt will be my guest today on Saturday Sports Extra (12:20) and we’ll talk about several Russians, including Yakimov. I have him as the No. 5 player in the system at this time and one of the main reasons is when he was posting crooked numbers.

That’s some nice work at even strength by Yakimov as an AHL rookie (I’ll post the entire EV scoring list today at 5pm and we can have a discussion about the group) and I think we’re looking at a substantial prospect with a good chance at an NHL future.

51 Responses to "UNDER THE RADAR RUSSIAN"