The Edmonton Oilers reduced their roster in a big way tonight, sending down 18 players. Several have to clear waivers—Tyler Pitlick, Brad Hunt, Ryan Hamilton, Andrew Miller—but the team has cut very few men from the “uncertain” group at this point in time. The tough decisions are still to come.

The complete list is here. Let’s have a look at our three lists.

I added Griffin Reinhart on Sept 24, we’ll see if that holds as we get closer to cut down day. None of the men listed here—there are 20 names—were sent down tonight.

This is the battleground area and tonight only confirms what we knew. Leon Draisaitl’s presence in this TC is pushing many role players down the depth chart and it could mean a trade in the next few days. We should also note the fact Anton Slepyshev also survived this round of cuts and that really impacts a large group of wingers. Interesting day. We’re now down to 10 defensemen and I do think Nurse and Davidson get sent down next but this isn’t a clear decision at this point. NO idea how the goalie competition shakes down. 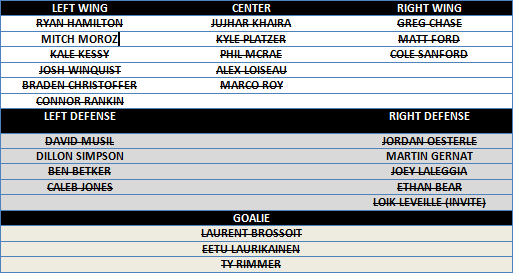 It’s over for the distant bells, no one made it through the first week of TC. Moroz, Simpson and Gernat are medical issues and the group that could have pushed on (Musil, Oesterle, Chase, etc) didn’t show enough this fall. That will come in the future or not at all, but for this season we didn’t really see a surprise from the depths.