Anton Slepyshev! If you’re looking for one name who impressed more than expected this camp (among the kids), the speedy Russian winger with good size and a quick release is a stone alone this morning. After the Oilers sent down 18 last night, the competition for jobs is both less populated and more intense. Let’s have a look. 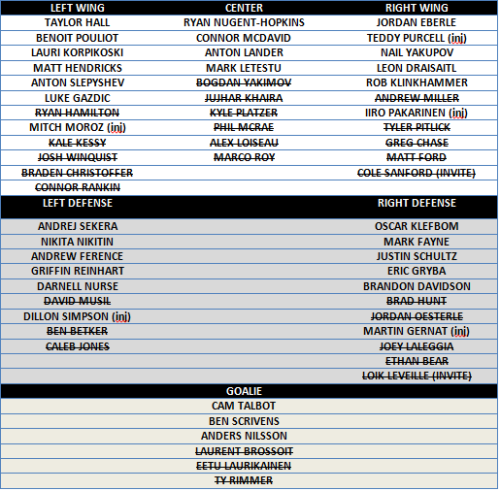 The cuts last night put a few things into clearer view. I think we can make a case for Leon Draisaitl making the team and serving as both winger and No. 5 center (Matt Hendricks can also fill that 5C role). Brandon Davidson remaining this deep into camp suggests there’s at least some consideration for him breaking camp with the big team—perhaps at the expense of both Griffin Reinhart and Darnell Nurse. Trading Davidson may also be an option.

The goalie battle is the most interesting one at this point. Anders Nilsson is signed to a friendly deal and he’s under control next season (RFA), so there’s a long range issue here along with the here and now. Are Nilsson and Scrivens equal? If they are, contract status could be enough to send Scrivens away. We should also talk about the possibility of starting the season with 3G, 8D, and 12F. It could happen.

First, let’s assume that Iiro Pakarinen, Mitch Moroz, Dillon Simpson and Joey Laleggia begin the season on IR. That leaves 15F, 10D and 3G left—28 men. Based purely on performance, the final five moves would be:

I don’t believe that’s going to happen, for obvious reasons. If I’m guessing today about the cuts, I’ll go Anton Slepyshev, Darnell Nurse, Brandon Davidson and Griffin Reinhart. That leaves a roster of 13F, 7D and 3G—and that may last until the club is certain Talbot—Nilsson is a workable tandem. If Purcell goes on IR, you might see Reinhart stay among the group I’ve mentioned.

At 10 this morning, we’ll hear the laundry list of waiver eligibles, this time including a few Oilers players. Let’s have a quick look at each of them.

We have this conversation every fall, get rid of the enforcer. The Edmonton Oilers believe this player type has value and I don’t see Peter Chiarelli or Todd McLellan causing a change in the weather. I’ve made my views on this known (there’s really no evidence this kind of player helps in any area) but that and $1.50 will get you an extra-large coffee. If Luke Gazdic doesn’t make this roster, I’ll fall off my chair.