I remember Daniil Zharkov’s draft day, he was funny and engaging and it was a fairly eventful weekend.

Zharkov hasn’t moved the needle much since his draft day but if we go back and look at what was written, it’s interesting to wonder where his game is today.

A few interesting names today, I chose one:

And there are rumors this gent may be on waivers later in the week: 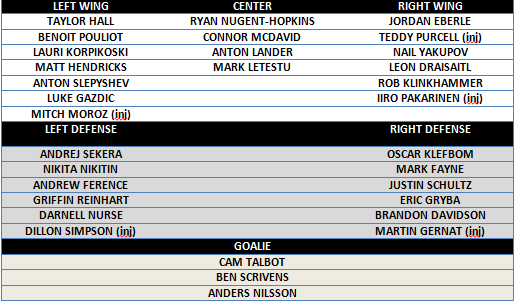 I think we’re at a point where Peter Chiarelli is probably calling and answering calls in regard to trades. The Senators grabbed a fringe defenseman today, so they may not be in the market for a blueliner (although they should be), but the LAK could strike and we know Nikita Nikitin has been in the conversation previously. I remain convinced Nikitin is one of the six best defensive options on the team, so that trade may not happen.

Ben Scrivens may also be available but after that we’re probably looking at internal solutions. Darnell Nurse is probably a few days away from being sent down, Brandon Davidson and Anton Slepyshev could be going with him.

The big play? A top four defenseman but Nick Leddy isn’t out there as far as I can see.

53 Responses to "WAIVERS AND WAVERING"