The Edmonton Oilers probably hurt themselves short term with yesterday’s demotion of Leon Draisaitl. He could absolutely help that 3line offensively but the Oilers want him to succeed and be a complete player. In the meantime, there are more than enough rookies on the club and staggering entry to the NHL makes sense.

Peter Chiarelli: “What we told him was – and I don’t know how much he heard, but we have to look at the big picture – ‘You had a good camp, you outplayed some people, no question there, play ramps up, things change, dynamics of the games change as games progress into the regular season. When we call you up, we want you to stay here for good. You have to work on the 200-foot game. Offensively you can play in the NHL right now, you have to work on the 200 foot game, the little stuff on the defensive side of the puck.’ Whether it’s at wing or centre – he’ll play predominantly centre down there – he now has another asset to his game because he can play both sides on the wing. We tried to send him down with a good message, he was upset but I think at the end of the day he’ll realize it was the right move.” Source

Well. That’s a tough lesson for young Leon, but when he’s 25 and playing in important games for this franchise, it may well make a difference. I would have kept him, gotta say. We can pretend that Lauri Korpikoski will provide the same level of creativity on the Lander line, or we can pretend that Rob Klinkhammer is a more important player, but we’d be lying.

Edmonton sent down a 19-year old player (imo) because he was the least responsible of the three young skill forwards (McDavid, Slepyshev) and because he is one of the players carrying significant bonus possibilities. I had him playing 41 games in the 2015-16 RE, still seems about right.

The Oilers want Leon to succeed as a complete player and they want that badly enough to rob the current team of a substantial element and turn the third line into something vanilla. I’m thrilled at their attention to the long term, and baffled by their short sightedness. And yes, it’s possible to be thrilled and baffled at the same time. 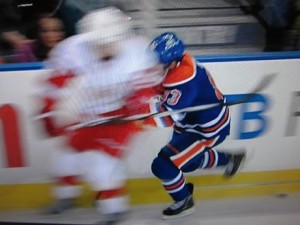 The Edmonton Oilers have a 2013 draft pick on their roster but not the one they selected No. 7 overall. No. 88 selection Anton Slepyshev made the grade and joins an impressive group of talented players. The club also has exactly 23 players—a full roster—from their past drafting.

Connor McDavid and Anton Slepyshev, you’re up! Jari Kurri’s number has never really been threatened, of course it was a different era and he had Gretzky at center (a small advantage, but I thought it should be mentioned) as a rookie.

Looking at that list, I’m struck by just how many players were solid rookies and then sent away over the years. From Martin Gelinas to Miro Satan to Andrew Cogliano and back to Kyle Brodziak, the Oilers have been bleeding young players AFTER successful rookie seasons since about 1990. Are all teams like this?

Griffin Reinhart and Brandon Davidson, go! The 1980s blue is here (save Charlie Huddy, who had a time-released debut over two seasons), I loved watching them as rookies because you could see the potential. Among modern blue, Oscar Klefbom looked like the most complete player in years to debut and I suspect he’ll cover that over the next 10 seasons. This could also be the rookie season for Darnell Nurse, so I’ll mention him here.

IS THE ROSTER SET?

Not sure. As I mentioned yesterday afternoon, there are some interesting names on the waiver wire this morning:

For the Oilers, only Corrado holds a great deal of interest but he’s worth looking at for sure. I saw him good (lots of people saw him good) and his skill set is a really nice match for the modern game. We’ll see, it would require someone going on IR to make room but this is a good player who addresses an area of need (RH D who can move the puck) so one hopes Edmonton has at least thought about it overnight. I’d replace Gryba with him today and consider it a substantial upgrade—he might be a very nice fit for Griffin Reinhart.

Hunter 1909 is doing his fine work in collecting projections from the group, I appear to be among the more optimistic in the group (no surprise, I’m a overly positive fellow). There are many reasons I believe Edmonton will be substantially better this season, including Todd McLellan, Connor McDavid, Andrej Sekera and the Hall cluster entering their prime. The biggest reason—for me—is goaltending. Let’s assume that Cam Talbot delivers only average goaltending for the Oilers this season and let’s also assume he sees exactly as many shots as Ben Scrivens did a year ago. The difference would be amazing:

That’s a saving of 39 goals. The GAA would go from 3.16 (Scrivens) to 2.43 (Talbot) if the new goalie can stop more pucks (and he can). We haven’t even talked about shot suppression and the penalty kill, etc. and you laugh but simply beginning the season with a roster designed to win hockey games sets a different tone.

If you’re looking for areas of improvement, or trying to make yourself feel better about the impact of a Leon demotion for that 3line, spend some time looking at last year’s even strength and penalty-killing goaling. It. was. not. good.

A busy show today, 10 this morning on TSN1260. Scheduled to appear:

195 Responses to "CHANGES IN ATTITUDES, CHANGES IN LATITUDES"