“As God is my witness, I thought turkeys could fly.” -Arthur Carlson.

Oilers fans enter the year raving about Justin Schultz and wondering about Andrej Sekera, when history suggests we have it ass backwards. What side to bet? I’ll take history for the win, Alex.

HOW MANY RIVERS TO CROSS?

Edmonton used 13 defenders a year ago and will probably use a similar number this coming season. Why? Injuries, ineffectiveness, trades, maybe a defender questions someone about the importance of fitness, it goes on. Here is last year’s blue in total minutes: 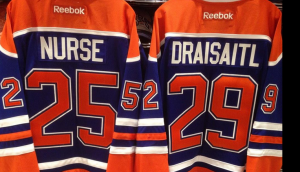 At some point during the first four games, that third pairing (no matter who is there) is probably going to get walked and wheeled and hammer and tongs won’t be enough. Griffin Reinhart to my eye isn’t slow, but he’s not so fast that covering for Eric Gryba’s speed is possible. I think that’s the pairing Edmonton probably goes with most of the time on this road trip and the other two (Ference and Davidson) have issues of their own. In a way, Reinhart—Davidson might be the most effective in the modern game but I doubt we see two rookies back there often.

Darnell Nurse has been blocked by the addition of Reinhart, who has one year of pro hockey and was acquired by Peter Chiarelli. If Reinhart was entering a stable defense with a reliable mentor I believe things would go pretty well. As this is not the case, I wonder how long before we see our first defensive shuffle.

Among Condors blue, Darnell Nurse would appear to be the obvious first recall. Nikita Nikitin has been sent down and I don’t think he’ll be back. After that? David Musil, Jordan Oesterle and then several youngsters trying to find their way like Dillon Simpson (injured), Joey Laleggia (impressive) and Martin Gernat (MIA since last season but maybe with a chance if he gets healthy).

I think Darnell Nurse will be a factor sooner than later, based on merit.

Tomorrow night’s game will see the Oilers carrying a large group of newcomers. Peter Chiarelli wasted little time in changing things around and the newcomers may be here a long time.

Nine names on the list, eight probably get into game action in St. Louis. Two new wingers but the biggest change is up the middle, the exact spot Edmonton needed help. I threw Pat Quinn’s group in here to show the contrast at defense. Edmonton remains extremely young and inexperienced at the position. This also shows McLellan’s handling of the roster (Quinn wanted a policeman on every street corner) and I also think it’s kind of funny that the Oilers—in a decade of awful—felt they were deep enough to run Lubo third pair on an opening night.

I think we should expect Peter Chiarelli to be active in the trade market this season. The team’s ‘keepers’ as I see it are Sekera, Klefbom, Reinhart and Nurse—all others could be available. I would think a Fayne+ trade for a more mobile defender (RH) is possible, and I also think Justin Schultz will be watched closely. It’s possible we see the entire RH side replaced and honestly that’s probably a reasonable way to address the blue.

The defense isn’t better, it’s just different. Peter Chiarelli was aggressive and active in his first season as Bruins GM, making several moves to address the blue. I believe we see the same thing in Edmonton, beginning with the recall of Darnell Nurse in the first half of the season.

History is a bitch, we would be wise to trust it when names like Justin Schultz and Mark Fayne are mentioned as cornerstones of a top-four blue.

A busy show, beginning 10 this morning on TSN1260. Scheduled to appear: