The 3-4-0 Edmonton Oilers have a chance to get back to .500 for the first time since opening night. It’s been an exciting week for fans, as the team delivered two terrific games and won a game in which they were clearly out of fuel and survived on guile—another indication this may actually be a brand new day. This season isn’t about the playoffs, so weeks like this one represent the best of 2015-16. It was a joy.

OILERS FORWARDS IN A BOX, GAMES 1-7 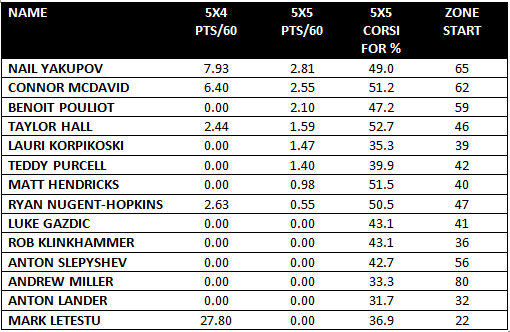 What a fun set of numbers with a delightful group at the top. This is sorted by 5×5/60 and features a line with three men over 2.00/60 that isn’t the Hall—Nuge line! It’s enough to give us the vapors, this fantastic new trio doing so well in such a difficult situation. Sure they got the zone-start push and certainly McLellan found them clean air when possible, but we’ve seen this opportunity given in the past without the kind of numbers we see here.

The emergence of Yakupov gives Edmonton a strong bat beyond the heart of the order. When Eberle returns, Edmonton’s 1-6 slots in the order should be top drawer, and that’s formidable. There may be another gear (Leon awaits) but for this season two scoring lines gives the team far more opportunity to win every night.

Taylor Hall isn’t getting the ZS push and he (along with Nuge) isn’t delivering the kind of 5×5 offense we’re used to seeing, but it’s also true Jordan Eberle is out and the Oilers haven’t been able to find a suitable option for RW on the line since opening night. The Nuge-Hall duo has been doing a lot of heavy lifting and that has extreme value and will continue to have great importance. Matt Hendricks and Rob Klinkhammer have played on the line, and it looks like Todd McLellan would like a gritty type as the third man.

I take that to mean that we may well see Klinkhammer tonight, although Pakarinen is also an option. It’s also possible Pakarinen sits out and gets some practice time before being inserted into the lineup. One thing is becoming fairly clear: The offense stops after the top two lines, and McLellan’s Oilers are running two lines whose goal is to play the opposition to a standstill while the jacks and kings get a breather. Some of that may have to do with the faceoff issues and we may see Edmonton make a move in that regard during the year.

OILERS DEFENSE IN A BOX, GAMES 1-7

This is sorted by Corsi for % 5×5 (I’m using hockeyanalysis and behind the net, as usual) and shows (I believe) the continuing emergence of young Mr. Klefbom. He leads in possession (Ference has been in only two games), has the toughest ZS and leads in 5×5/60. I don’t expect a lot of offense from the dream weaver, but that’s a nice start. His partner Justin Schultz is getting a far more difficult ZS than a year ago and the numbers are better than I would have thought—although the offense is off 5×5. Interesting pairing for sure, I wonder if we see a Klefbom—Sekera pairing if this team feels they have a chance to have a more substantial season.

Mark Fayne is a veteran defender but I get the feeling he’s the Ringo Starr of the top 4D. Tough ZS’s and opposition make these numbers better than they appear, but he’s not a puck mover and it limits his usefulness. Andrej Sekera struggled in early games, but I think he’s starting to find the range. Reasonable offense from the veteran as well, he’s my No. 2 D on this team (behind Klefbom) if there’s an expansion draft.

The final four (when healthy) appears to be ranked thusly: Gryba, Reinhart, Ference, Davidson. Reinhart is out for tonight according to Matty, so expect Andrew Ference.

My Top 20 Prospects list will kick off about one month from now, and there are enough games played in most leagues to start the discussion. The last major look we had at the group is here. Players who will be moving up are underlined, those who may move down are in italics. Still lots of time for players to move up and down, I’ll start the proceedings with No. 1 on this list (who will it be???) last week of November.

A lot (I mean A LOT) of chatter about the No. 1 PK in the NHL, but there are some things about this Oilers team people should know.

A fun morning with lots of chatter across the wide world of sports! 10 o’clock, TSN1260: