This promises to be a very interesting trip to the left coast for the Edmonton Oilers. Based on what we’re hearing in regard to lines and pairings, Anton Lander and Mark Letestu are going to get a push—and may the best man win.

PROJECTED LINES AND PAIRINGS, FOR TONIGHT

I see a real chance for Mark Letestu and Anton Lander tonight, and a big opportunity for Mark Fayne, too. Lander is over 50% away from Lauri Korpikoski and 62.5% when playing with Jordan Eberle in less than half an hour last season. Mark Letestu is 13% with Lauri Korpikoski (only 13 minutes) and 45% without, but honestly hasn’t looked bad at all when playing with reasonable linemates (Purcell, Hendricks) and I’m not sure Lander is a better offensive player. That’s a battle to watch and I do think we’re getting to a point where decisions will be made.

Mark Fayne is not a popular man currently, but he has a 60% Corsi for % 5×5 without Andrej Sekera. He is 53.8% Corsi For 5×5 with Oscar Klefbom and there’s no doubt he’s struggled, too. It’s possible to have good numbers and get noticed for negative things—single moments and events can have super importance while being exactly single moments and events. I’m pleased Todd McLellan is giving Fayne another chance, and hope the Oilers win tonight. They don’t have to win November, but it would be very beneficial to keep it close. Hang around until McDavid’s return, romp January to April. It isn’t pretty, this is the beginning of the Chiarelli—McLellan era and we’re talking long view, but it’s also year 10 of Evil Dead for Oilers fans. Winning in November is important to this franchise, and for players who want a place on what should be a wild run through the rest of this decade.

Oilers dropped into last in the West tonight. So I wonder how fans are going to take it when Edmonton wins draft lottery again?

We’re going to get a lot of that, and hey this has been an easy joke forever, why stop now? Chiarelli and McLellan can get a good look into these players during the next few games and find out what is going to work. The rest? Waivers, trades, the streets of Bakersfield. One of two things is on the way for some of these Oilers: Winning, or a brand new city.

This is sorted by my new favorite toy, On-Ice scoring chances against/60. One thing I’m reading more and more is ‘Corsi doesn’t cut it’ and man I have to say there’s exciting new looks being explored (G Money, and others, too). I like this new item, it’s a long blasted name but we’ll live with it. I also like CorsiRel, and when we look at those two things (Rel and ONSCA/60) there are some large gaps. Griffin Reinhart’s CR is poorest on the team, but his ONSCA/60 is among the better ones. Is it possible for him to trail in CorsiRel AND be among the better defenders at the other discipline? Maybe, these are still small sample sizes (Reinhart has played in seven games, far too small a sample size to draw any real conclusions).

Defenders who perform well in both disciplines? Darnell Nurse, Brandon Davidson, Andrej Sekera. Defenders who do not show well? Eric Gryba, Andrew Ference. I’m seeing a few ‘wait until Justin Schultz gets back’ comments these days, maybe this is exactly what he needed—absence makes the heart grow fonder. I’ve even seen some say ‘when you hear negatives about Schultz, remember when everyone hated Petry!’ but that’s not really true—the math was on Petry like a fly on stink from basically the first anthem. I think a Reinhart—Schultz pairing might be interesting, but would be very careful about touting it as something usable in the distance. Jury is out on both men, that’s a fact. If you’re suggesting Justin Schultz will save this group, please stop. 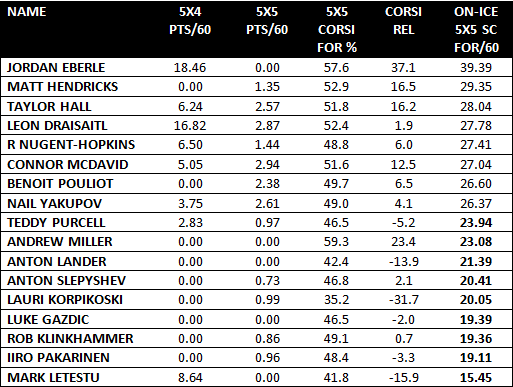 There’s a spot, in the middle there, that is fascinating. From Eberle (one game, folks!) through Yakupov, the Chances For/60 shows a healthy engine with pistons thrusting. Teddy Purcell isn’t TOO far from the ‘in crowd’ and that’s impressive. Why? TP’s Corsi For % 5×5 is 56% away from Lauri Korpikoski, 31% with the veteran. I wonder what that chance number would be without the Finn? Darcy was talking yesterday about three scoring lines, and if everyone was healthy, Edmonton could cobble together two scoring lines and an interesting third:

Is that three scoring lines? In my RE back in the summer, I projected the top three lines as being the following (and allowing for mingling of lines which always happens):

By the way, the Nuge line is on track (using Leon) and the McDavid line in the range, although that will change with the 97 injury. The third line—I’ll use Korpikoski-Letestu-Purcell trio—is shy. I think the top six isn’t the problem, and the third line is there—but they can’t find it! I would have guessed Letestu with Purcell (49.1 Corsi For 5×5 %) would have played more than 38 minutes at 5×5 (that’s like three games) together. It wouldn’t surprise me to see one of the new 2 or 3 lines have immediate success—lots of talent and two hungry centers.

The Oilers have lost a few useful men over these recent seasons for reasons great and small. I’m tempted to write ‘it’s nobody’s fault, but….’ although the truth is we mostly know the culprit. Theo Peckham had a helluva lot going to him, but we know what happened. Marc Pouliot had some nice things, we know what went wrong.

Magnus Paajarvi is a player I think we can reasonably point to as one who was lost along the way. As a rookie, he scored 10-13-23 at evens with (mostly) Sam Gagner and Linus Omark. Last year, in about half a season, Anton Lander scored 1-10-11 at evens with men like Matt Fraser, Andrew Miller, Taylor Hall and Teddy Purcell on the wings.

This year, not a drop. I’d love to have someone to blame here, but Lander’s a good man and we haven’t heard a whisper about attitude or poor work habits. This is a young man who has leadership qualities, has succeeded on the international stage, and should be a bona fide NHL player. And yet, a season after he seemed home and dry, we are here. Sometimes in life, things don’t work out and there is no demon or villain in the piece. This is such a time. 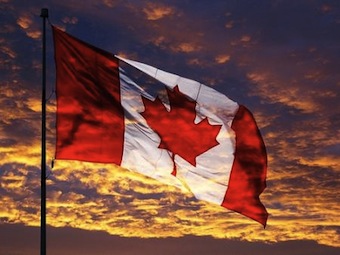 I’m sorry for posting before 11 this morning, but part of this post is to promote the Lowdown. So for selfish reasons, you are reading this, I beg your forgiveness. 10 this morning, TSN1260. Scheduled to appear: