It is extremely rare for an air of mystery to revolve around any player in the modern era. We see video, get the vitals, run the NHLE and receive many thoughtful and accurate scouting reports on these players in their draft seasons. And yet, with Anton Slepyshev there is a certain delight in the news received this fall. On or around draft day, we were told he was 6.02, 194, but upon arrival this fall he was clearly bigger—6.02, 217—and the young man can wheel while also scoring goals. That’s a tremendous combination and partially explains the spike in this year’s rankings for the Russian.

Among the men on this list, Andrew Cogliano is clearly going to have the best career (I don’t see any in this group who look like they’ll challenge, do you?). That was a really bad trade. JFJ, Schremp, Hartikainen and Yakimov are the only players who haven’t played in the NHL this season, incredibly. Marincin is coming up on 100 NHL games, I still think he’ll have a career. Based on where they were drafted, and using NHL GP as the metric, Chris VandeVelde turned into a very good pick. 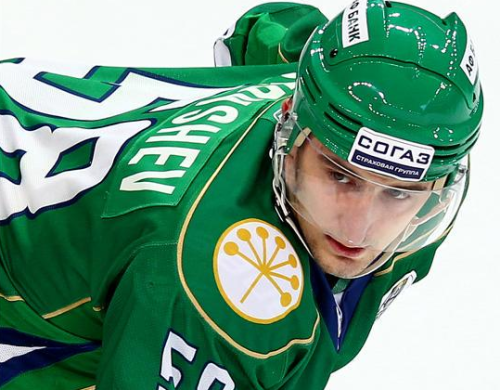 Ferraro on Anton Slepyshev: "That kid's a player. I saw him at World Junior & loved him. He's not a 3 years in the AHL" project. #Oilers

Peter Chiarelli on Russian fwd Anton Slepyshev: "He was a little further ahead (of Draisaitl) as a professional player." #yeg #nhl #oilers

Looks like Connor McDavid will center Taylor Hall and Anton Slepyshev in his NHL debut for the Oilers on Thursday.

When Anton Slepyshev was asked if he heard of @cmcdavid97. His answer, which @Nail10_1993 translated, was they even know about him in Africa

Slepyshev’s TOI sample is so small there isn’t much to be gained here. One thing worth noting: His one NHL point came when he was on the ice with Taylor Hall. Slepyshev’s future with the Oilers, such as it is, will definitely be part of a skill line. Is he one of the members of the unicorn ‘third scoring line’?

The Vollman has him in a good spot and his possession numbers aren’t terrible. You’d like to see him in the lower quadrant, filling the net with other youngsters while facing the soft parade. That day may be coming soon.

The thing about Anton Slepyshev is that we didn’t really know about his range until he got here. In watching exhibition games, it was clear that the combination of speed, size and skill makes him a far more significant prospect than previously suggested—we were missing the final chapter of the prospect book on him. He did score 15 KHL goals and impressed before the regular NHL season. We don’t have a full season of watching Slepyshev—and he might not have enough offense to play on the wing with one of these ridiculous centers—but the KHL season and the impressive fall are enough to get him here.

Oh, and the Chiarelli line above about Slepyshev versus Leon? I suspect NHL GMs have to tell fibs when cap issues arise and decisions like this are made. That’s my guess, anyway.  The top three names on the Winter Top 20 for 2015 are well clear of the rest of the men on this year’s list. Anton Slepyshev comes right after the big three, ahead of a prospect with higher pedigree, because the Russian’s offensive potential and speed have high value. In five years, he could be famous.

It’s early days, but the 2013 draft may end up being what I hoped the 2010 draft would become. Craig MacTavish was at the helm for two drafts and came away with Darnell Nurse and Leon Draisaitl in those two years. Those two men look like cornerstone players who give further strength to the murder of No. 1 overall’s skating around the rink.

It’s the later round selections in 2013 that could really help the organization. Slepyshev is in the first year of his entry-level deal and by the end of it could be delivering impressive offense for cents on the dollar.

Bogdan Yakimov is a gigantic human being who can play hockey, never a bad idea. I’m not absolutely certain where he’ll play when NHL-ready and in all honesty it might be in another NHL city. That said, if Leon’s home in the bigs is RW, then another tower in the middle could find room.

We’re just closing the books on the 2010 draft, and even then Martin Marincin and Brandon Davidson are pushing for a better day. The 2013 draft houses new pro players like Kyle Platzer and Greg Chase, no one knows their road or where we’ll find them in 2018.

Still early days for the 2013 draft, and yet the arrows are showing up and heading in a good direction. Anton Slepyshev could be a notable Oiler in the coming seasons. We can’t see that from here, but there are good indicators.

Back to the Future