In a century where the Edmonton Oilers spent their days and nights mishandling talent, it’s wildly ironic to ponder this possibility: Solving the goalie problem by trading a distant bell draft pick. Anders Nilsson is still obscure—most Edmontonians wouldn’t recognize him at the local donair shop—but the young man has a glorious chance to win a starting job and seal off an area of unbelievable weakness in this city. His ranking should be regarded as a combination of talent and opportunity.

The eye rolls over over these names and the brain informs us about promising careers sent away, muscle-building products apparently misused in exotic places like Kosice, and college men judged to be unable to think on their feet. Jesus, Mary and Joseph, what a century to be alive! 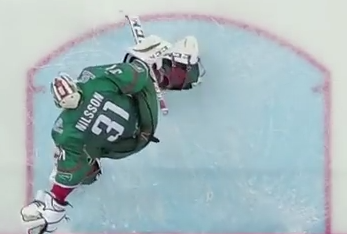 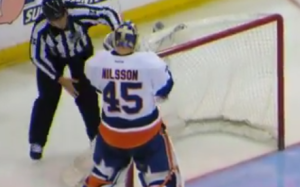 If I'm the Oilers I keep rolling with Anders Nilsson… In my mind the #Oilers really have something here with him.

Anders Nilsson owns an even-strength SP of .910 currently, that’s 16 points in front of Cam Talbot and ranks No. 31 among goalies with nine or more starts this season. That, my friends, is the definition of reaching for a positive. Why then does Nilsson rank No. 7 on the prospect list? Part of it is opportunity and the other part is his performance in recent games. Nilsson’s save percentages in his last five games are .939, .919, .810 (flu game against ARI), .852 (Hawks) and .950. I’m not convinced he’s a better goalie than Cam Talbot, in fact I think Talbot is clearly a better one based on resume. Doesn’t matter.

Between now and April, Anders Nilsson is going to get his opportunity and if he performs well enough it could mean a contract and NHL employment. Now, today, this instant, Todd McLellan is looking for his goalie, and his goalie had a .950 SP in the last game played by Edmonton. Goal is a weird position, and Nilsson’s current status has extreme value.

#Oilers need someone to step up and take job as No. 1 goalie https://t.co/Kka7L5eAns via @npsport pic.twitter.com/mByM98mHWF

One other thing: Nilsson’s pro career has one giant asterisk in the middle, and it pertains to B-12 and you can read a little about it here. If we place that illness inside his career numbers it creates a dip in performance that may end up helping the Oilers in a big way.

The 2012-13 season saw a massive fall in performance and he did not recover in the following season. Nilsson’s KHL performance last season got him to Edmonton and he’s in a battle for NHL employment currently. The two seasons that followed his impressive first NA season may have been impacted by his illness and recovery. If that is in fact the case, we see a very nice progression from first year pro through this season and Edmonton may have caught lightning in a bottle. Once again, I want to stress, these are early days and betting on goalies is a very dangerous game.