The Edmonton Oilers will return Justin Schultz to the lineup in the coming days, and it presents Peter Chiarelli with an opportunity. My guess is they’ll send Griffin Reinhart to the minors, or maybe they IR Eric Gryba, but there’s still some discovery to come and Schultz is part of that process.

This is Friday night, apologies for the NJ lines but it seems Cammalleri was playing on two lines. The Oilers TOI at evens isn’t really indicative of overall play, it was a big night for special teams. Still, the fact that EV leaders were Darnell Nurse and Brandon Davidson is a tell, so we should acknowledge an unusual evening for the rookies.

I like the rookie pairing of Davidson—Reinhart more than Anything—Gryba, but PC needs to be aiming higher and the impending Schultz arrival gives him an opportunity to do it. If we assume that Todd McLellan would like to run fewer rookies, and that Darnell Nurse is his best one, then it’s possible we see the new V6 like this:

With Gryba and Ference as the sitters and Griffin Reinhart in the minor leagues. That’s probably best case scenario, although I suspect Chiarelli (or someone) is pushing hard on the Gryba usage and that could lead to this:

I really don’t like that, for tons of reasons. First, Klefbom is free to wheel without Schultz, and if there’s one thing these games have shown it’s that the Swede has a wider range of skills than implied when alongside Schultz. The other item is this: The higher you play Justin Schultz in the lineup, the more you see chaos. I understand he was more controlled early this season, but Edmonton is more settled in the top four D now than they have been in some time.

You will read this week that Mark Fayne is not a good NHL defenseman, and that Justin Schultz has led the Oilers in TOI since pretty much the moment he got here, so why not give him his usage back! To both, I say it’s madness. Justin Schultz was asked to do too much and one hopes Todd McLellan employs Sekera and Fayne in feature roles RH side, with Schultz on the third pairing. Allow him to get comfortable and force his way up the depth chart. It’s the right thing to do. 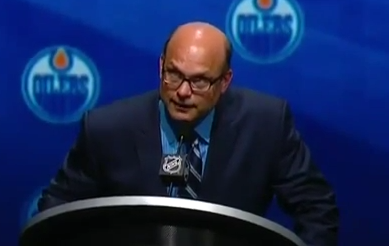 I don’t know that the Oilers can make a trade like the one suggested, the candidates among forwards (Strome, Okposo) have their own issues. Elliotte Friedman’s comment about a three-way trade makes sense, but I still believe this ends up Hamonic in Minnesota.

Lots of chatter on the blog about ‘no prospects of note in the AHL beyond Brossoit’ and I get that, but it’s also true that there are performances worthy of your consideration. Among the forward group, and I always look for even-strength scoring as the purest way to suss things out, we are seeing some players emerge:

This pulls all of the power-play points away (none of these men are going to be on an NHL PP in the near or likely distant future) and gives us some idea about their overall offensive quality in the fairest available way. So, first up is a guy the Oilers didn’t draft and haven’t signed, Josh Winquist. That’s so Oilers! He looks like a legit prospect from here, his skating must be the issue because in talking to scouts they rave about his ability to play the actual game.

Alexis Loiseau is another of those free-agent signings and—this is early days—we do see a spark from him offensively. Jujhar Khaira is in his second pro season and some are touting him as an emerging offensive talent, but we have a fairly large book on him that suggests otherwise. These kids can fool us, but I think it’s best to have him show something like >.7 even-strength points-per-game over a season before we begin to project him into the NHL for anything beyond a cup of coffee.

THE LAST OF THE OIL KINGS

166 Responses to "THIS MUCH MADNESS IS TOO MUCH SORROW"