One of hockey’s ‘forgotten arts’ is the headman pass. Tape-to-tape on the fly, you see it in today’s game but it’s rare enough for scouts to covet that element of the offensive sortie. Ethan Bear has a range of skills and has real promise as a pro player, but the thing that caught my eye early on was the mention of passing. It is such a big part of the game and yet there are NHL players who can’t really count it a a strength. Career opportunities are good for young men like Ethan Bear.

Dubnyk was brought along slowly, always looked like a future NHL G (Asiaoil called it when he was back in Kamlooops) and the winter 2010 list was especially strong. Other than that, by the time we get to No . 10 on the list we’re around 50/50 to make the show and only two men have played more than 100 games. 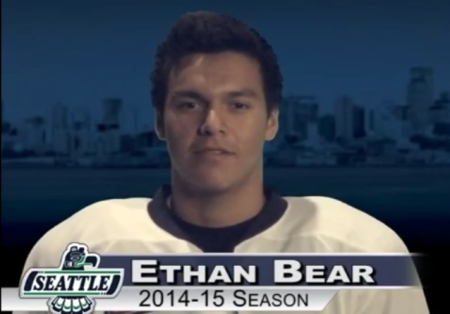 I had Bear as a second-round pick on my 2015 draft list, so also had him high in the top 20 in the days after his selection. He’s covered that bet so far, moved up a little on what is a very fluid top 20 this winter.

For any Oiler fans that need some positive news. Ethan Bear (5th round pick) plays in Seattle. 3rd in D scoring.. 23GP 24 points.

Button’s comments jive with a conversation I had with an eastern NHL team’s western scout. It’s important not to overstate the potential, because it needs to be married to hard work and years of physical maturation, but this is a substantial prospect.

Bear’s offense is intriguing (NHLE was 11 points last season, at 22 as we speak for this year. Source: CHL stats) but the range of skills is the thing that gets my attention. A good passer, mobile, a little undersized (6.0, 197), plays a rugged style and makes good, quick decisions. That sounds like a very good comp for the modern NHL defenseman. Again, many miles to go.

ME AND MY SHADOW