The problem is, you develop a past. When a fan base first becomes aware of a player, a clock begins ticking in their brain. There were actually patient Oilers fans when Taylor Hall was drafted, and Ryan Nugent-Hopkins, too. All of that patience is gone now, for fans, but it is important for the Oilers management to stay the course. Fans are yelling now, for the heads of their best players, men like Taylor Hall and Ryan Nugent-Hopkins. PC can‘t trade those men for the offers on his desk, he must keep his powder dry. We can be struck by madness, Peter Chiarelli can not, and that is vital to the future of this franchise.

Why? As angry as the fans are now, imagine Hall winning a Stanley Cup in Calgary, Vancouver or Montreal. As a devout follower of the Montreal Expos, ask me how it felt to see Gary Carter win the 1986 WS in a Mets uniform. Yeah. Sucks. And blows.

I was heartened by the words of Peter Chiarelli a few days ago, when he made a tremendous amount of sense for a man overseeing a team that (at times) appears to be intent on reenacting the scenes from Slap Shot.

Those words have iron, but the man who chose them must have moments where he, just like the fans he represents, feels like taking a Louisville Slugger to the hotel furniture. Stay the course, Chiarelli, and we‘ll try to remember you‘ve been on the job for six months.

I had hoped we would be talking about taking off ramps and heading back to the land of unicorns, clear mountain streams, women of genuinely questionable repute, really good beer and no hangovers. Instead, we‘re back in Shawshank, I think this is the laundry room.

If I had to pick a defenseman to pull from the lineup, it would be Fayne, no question. Based on the roster and available options, that would be a mistake, also no question. 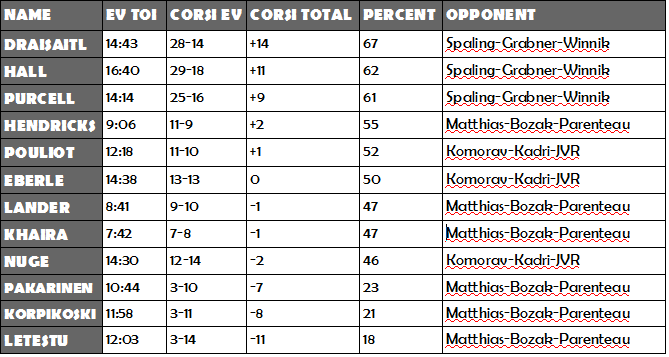 THE HEAT IS ON

Todd McLellan had some words after the game. McLellan is an effective communicator and it doesnt take a lot to read between the lines:

I think it‘s fair to identify Nuge and Eberle as the main targets of that scoresheet item, but the Nuge doesn‘t belong on the list in my opinion. Why? Let‘s look at scoring over the last 10 games and see where the real issue lies:

Eberle is fighting it for sure, he has been slow to come back from injury and that‘s a concern. Nuge? I do think he‘s shy at evens but the points are there and let‘s remember he gets the horns in terms of matchups every night. The sins of this team are not specific to the Nuge or even Eberle, they are (once again) the sins of youth and lack of real depth in important places.

Dreger: Chiarelli doesn't want to give up Nurse or Klefbom and Snow doesn't want Eberle for Hamonic. #Oilers #Isles https://t.co/s90GqKOSXh

This tells you that Peter Chiarelli is doing his job, folks. Jordan Eberle  is a $6 million dollar a year winger who can‘t stand up for falling down, but this too shall pass, and when Eberle starts scoring again he‘ll be too valuable to trade. Eberle and Nuge will find a way, their history screams it.

The defense looks far better than it did awhile ago. Still major issues, but if I‘m PC another forward who can check and score is a really good fit about now (and this assumes Davidson is okay).

I think this probably represents the thinking of most observers currently, but for me there are major differences between the two teams.

If you want to know the reasons Edmonton lost, there are some that hold water beyond the usual.

On the other hand, there are some things to like:

Today, because of Todd McLellan‘s comments, you‘re going to read and hear a lot of negatives about the Nuge and Jordan Eberle. That‘s fine, they are professionals and that comes with the territory.

None of it matters, unless Peter Chiarelli does something in a fit of pique. If he does, the same angry fan base calling for him to take action will never forgive him.

And that‘s the struggle for Peter Chiarelli this morning.

LOTS OF INTEL, WHAT DOES IT ALL MEAN?

229 Responses to "A LONG DECEMBER, WITH A REASON TO BELIEVE"