Nilsson Schmilsson, man what a game! The Oilers and the Bruins facing off is never an easy item for me, because my roots with both franchises go back decades. This was a fine result, just like a year ago when I saw the Bruins-Oilers with my daughter, a newer and very loud hockey fan at the time. I will remember that game forever, this one won’t have the same sustain, but it feels good this morning.

ME AND MY ARROW, YEAR OVER YEAR

The goal differential is far better, and a lot of that has to do with the goaltending. Last night was encouraging because of Nilsson, but also because secondary scoring got the Oilers points.

I do NOT think the Oilers should spend any assets on the team currently, but there is a small, small crack open here. I wonder if Anaheim doesn’t catch fire and San Jose fall back, leaving that last playoff spot wide open. Don’t go planning for your playoff tickets, but there is still time. Now, last night.

It's been a month since Connor McDavid's injury. Oilers now 4-7-2 in that span without him.

Anders Nilsson is up to .915 SP now and we are looking at a possible solution to one of the goalie options. Nilsson has some issues, but has settled in and seems to be taking over the No. 1 job. His EV SP is up to .921, and that ranks him No. 29 in the NHL among goalies with 10 or more starts. Small victories are big steps.

Cam Talbot has to get another game here soon, but the Buffalo and San Jose games are important in the coming days, so maybe he gets Dallas.

Tonight's oilers game is brought to you by the number 30…..the letters f and u….and the word soft 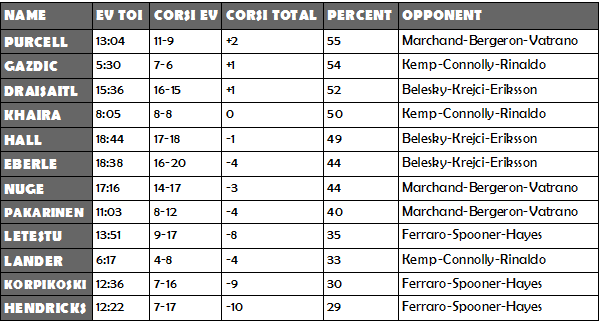 JUMP INTO THE FIRE

TRADE NUGE? WHY? @travisyost on why dealing #RNH is an extremely bad idea. https://t.co/0M6dkDmK0Q pic.twitter.com/yWCOrQMI5i

I think trading Nuge is madness, have expressed it over a few days and will not bore you again with my charts and numbers. I do think the Oilers have started to make decisions and if they want to keep Nuge and improve the size of the skill, that means bigger wingers and defensemen.

What does that look like? I will guess that Jordan Eberle, Teddy Purcell, Anton Lander, Justin Schultz and Mark Fayne are vulnerable. I suspect Milan Lucic, Dustin Byfuglien  and any number of big wingers in the AHL are on the radar. Chiarelli’s Bruins had a bunch of 6.04, 220 wingers and Chiarelli’s Oilers will be the same, in time.