Taylor Hall and Jordan Eberle have a story to tell about their Oilers days—call it ‘To Hell and Back’, with more hell and very little back—and I think most of us would like to see a happy ending. Maybe they won’t win Stanley together at the new building, but a turn north in year six wouldn’t go amiss.

Last night was an unlikely victory, I think that is probably a fair description. The Oilers were never in the game, as you will see in a minute, but they won it because Anders Nilsson had some kind of weird B12 issue a couple years back and the hockey Gods decided we needed another gift between the pipes. Hopefully we will see Edmonton build a defense before the Swede goes mad.

There is a window here where Edmonton could close the gap. The last two games (both wins) and last 10 games (4-4-2) suggests enough positives for Edmonton to hold their own, perhaps turn north. This week (Buffalo, San Jose, NY Rangers) could see them begin the climb. This morning, Edmonton is out of the basement and No. 27 overall.  And they may have a goalie.

Today, we get to talk about shuffling and just how stubborn this blog’s author can be. Here we go; 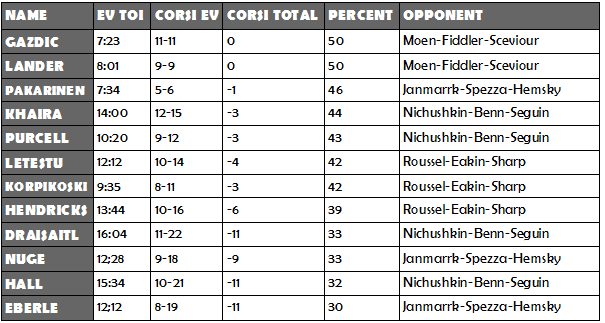 Anders Nilsson (@EdmontonOilers) improved to 6-0 in 6 career shootouts. He has denied 13 of 16 career S/O attempts. pic.twitter.com/ka7dOhMEzO

Nilson now has a .921SP and .925SP at evens, good for No. 19 overall at evens. He is winning the job outright, but at some point Talbot will have to play. I suspect it will take a loss though, unless the young Swede is exhausted. The acquisition of Nilsson for Liam Coughlin will be a major story of the offseason should this continue.

Music! Lordy. Do you remember the last game against them? Splendid effort by Nilsson, now they have to figure out how to keep that structure for longer. Things that are a worry;

A big win for the Condors last night and some of the young pros had solid nights. Bogdan Yakimov returned and had an assist, Griffin Reinhart played well based on reports and the offense was driven much of the time by actual prospects. Good result.

194 Responses to "A WARM DECEMBER"