Bogdan Yakimov’s timing may be perfect. Drafted by Craig MacTavish in 2013 when size was a priority, it is even more in focus under Peter Chiarelli. The young Russian had a good training camp, but has struggled in Bakersfield. Injury issues (knee) have also been a part of his early 2015-16 story.

Six years after he was drafted, Devan Dubnyk was still a prospect (but would play his first 19 games in 2009-10). Theo Peckham had a good early career, seemed on track until the lockout and he didn’t stay in shape, assuming the season would be lost (or that was the story). Anton Lander was drafted in 2009, so he is beyond the Dubnyk outer marker at this point (although Lander is no longer a prospect). 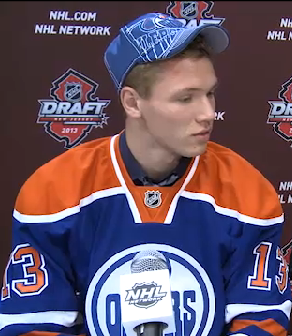 I look for two things in prospects, range of skills and unique skills. Well, you can’t coach 6.05, 232 and the Oilers don’t have ten miles of puck protection forwards. Also, Yakimov’s offense is sufficient for him to clear other young players (basically Khaira) who may in time apply for the same NHL job. Source

Head Coach of Bakersfield Gerry Fleming tells us that Bogdan Yakimov hurt himself in practice today.

Yakimov made it a one-goal game earlier in the period, assisted by Christoffer. Bogdan's first goal since Nov. 1st. #Condors #Oilers

Yakimov has been in two games this weekend and posted points in both, at the time of this writing is 14GP, 3-4-7 on the season. He is a big man (6.05, 232) with some offensive ability and he is a reasonable skill forward (but will be a complementary player without a major upside if he makes it in the NHL). I have him here because the offense appears to be more substantial than the other men who are trying to find their way to the Oilers. The injury this fall allowed Jujhar Khaira an opportunity and Yakimov may have to wait a year for another one.