When the Edmonton Oilers drafted Jujhar Khaira, they were on the ‘draft for need’ plan and had just chosen Mitchell Moroz in the previous round. They were (and are) looking for big men who can also play the hockey. It sounds pretty damned easy, but there are very few of them available to the 30 NHL teams in any season. The number of true power forwards in the NHL, who can score at a rate we would associate with real offensive talent, is very low. Teams likes the Oilers have passed on great talent in the chase, and I believe it is folly to do so.

It’s funny, that Brad Winchester pick in 2000 was pretty much the same as the Moroz and Khaira picks in 2012, Oilers looking for that elusive big man who could play with skill. When that player does arrive, we will count up all of the picks inside the top 100 that were an attempt to get him. I count a baker’s dozen in the first decade of this century alone. 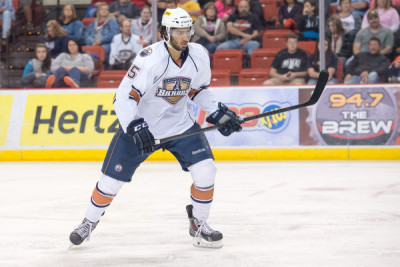 Entering this season, the big question for me about Khaira had to do with the offense. Before his recall, there were signs of progress:

That may not appear to be a monster step, but we don’t have TOI totals and we are talking about a complementary offensive player who will bring some other elements to the game. If you see Khaira as a future 30-point NHL player, does that give him enough value to project him onto the roster as a full-time contributor? His NHLE this season (using the Vollman) is 82GP, 9-10-19 and this is his second year pro. There are going to be more talented big men available to Edmonton via free agency, but he has some offensive ability and seems a more attractive package than Bogdan Yakimov (more speed) and Iiro Pakarinen (more physical) who are/will be applying for the same jobs. Seems to me he has a chance here.

The #Oilers have officially recalled Jujhar Khaira from the @Condors (7 points in 16 @TheAHL games this season). pic.twitter.com/Llw8FvmWZL

McLellan moved 4th liner Jujhar Khaira up with Hall and Draisaitl. "He provided some size and space, and he's getting better with puck."

The worst time to project a prospect is when he is playing really well over very poorly. Edmonton’s picks outside the first round have not flourished after callups in the recent past, although Brandon Davidson, Tobias Rieder and Anton Slepyshev have recently bucked the trend. Khaira is a big man, he plays with an edge and does appear to play an intelligent game. Honestly, and I hate like hell referring to the Habs in a positive light, but they always found a way for their checkers to score enough to play in the lineup.

One of their tricks involved playing offensively shy forwards with high-end skill types. Jean Beliveau helped John Ferguson with the goals while Ferguson policed the 1960s. Bob Gainey would line up with Jacques Lemaire and Yvan Cournoyer. Maybe that will be Khaira’s role, or the role for a player similar to him. There is going to be room for big, rugged wingers on this Oilers team. Starting now.