When the Edmonton Oilers drafted Caleb Jones, there was a lot of talk about defense and very little about his offensive game. As time elapses, it appears Jones has a far more complete game.

If you count 100 games as success, there are two of them from the last decade who I posted this late in the ranking. Tobias Rieder looks like the kind of player Stu MacGregor was fired for not drafting. 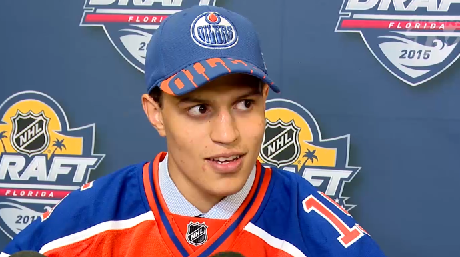 I recall Seth Jones confirming with the @pdxwinterhawks during the WHL playoffs a few years back. Yesterday brother Caleb Jones did too.

The scouting reports I read left me with the impression Jones was shy offensively, so that two-way description seemed a stretch. So far, he appears to be a far more impressive talent with the puck than the collective reports implied. That could be me mis-reading, or Jones’ boxcars not telling the story, but he is having a strong WHL season (27GP, 4-16-20) in what is probably the second best junior league on the planet.

The two seasons leading up to this one are difficult to suss out, there simply isn’t enough there. The WHL season gives us more to go on and we do see some offense. Warning: The PP minutes are unlikely to be there when he turns pro or makes it to the NHL. He does have enough offense to keep him from being called a ‘stay-at-home’ defenseman and for now that is enough to allay my fears about that side of his game. We need to see more of him and the second half of this season will be interesting to follow.

I miscast him in the summer, believing he was a defensive defender. The development camp was an eye opener, he has some speed and tools and perhaps we are looking at a raw player, but he has talent. In the winter rankings, he should be higher but the No. 1 picks didn’t graduate until after the list was created (Connor McDavid, Leon Draisaitl and Darnell Nurse should all be graduates by summer). Caleb Jones was not well known to us on draft day, but in the months since has been impressive.