Kyle Platzer is a two-way forward with some of the resume bullet points we saw from Kyle Brodziak: Late pick, good offensively and a solid checker.

Brodziak delivered a slightly higher point total, but this is across a one-decade gap so it isn’t an apples to apples comparison.

These are the kinds of players you would expect to emerge from the lower register of a prospect list designed to value offense and top 6F/top 4D potential. Brodziak has enjoyed a solid career, Edmonton traded him miles too early.

We are well past the ‘complete’ prospects and the kids who have a nice range of skills. From here on, we are talking about (for the most part, certainly among players procured 2014 and before) about young men with some things to work on. There is no sin in that, Kyle Brodziak had a similar pedigree and he made it work.

Kyle Platzer is a ‘draft and follow’ type and so far he has some of the things we associate with a future NHL player: He spiked offensively in junior after not playing much in his draft year. He has a range of skills, so could succeed as something less than an offensive player should his bat turn out shy.

There is no hurry for Platzer, this is his rookie pro season. That said, Edmonton’s willingness to employ Jujhar Khaira after a 10-point rookie pro season suggests there is a chance to be recognized by the current management. Each fall, Kyle Platzer impressed. Now he must do it in pro hockey, this and next season. He has done some things that make him a prospect to follow. 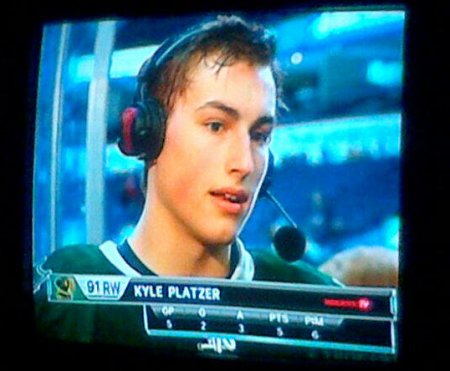